Blacks Should Be More Afraid Of Other Blacks Than Cops

Rudy Giuliani joined Fox and Friends to trash Mayor de Blasio and decree that Black men should be more afraid of other Black men than of his cop buddies murdering black men with racist intent.

Echoing Trump’s “law and order” idiocy and hatred of the Black Lives Movement, Giuliani gave his unfettered support to law enforcement, and decreed that he has always been the true savior of New York.

Me: What can I say? The facts do not support Giuliani. He lies like Trumop does.

Digsby: Bret Baier remarked that as a matter of tradition, past presidents “stayed away from overt campaign rhetoric from the Rose Garden or the White House.”

“Trump managed to work himself up to deliver one of his patented incoherent rally performances as if the audience in front of him weren’t a bunch of masked-up, socially distanced reporters, who were undoubtedly confused as to why they had been summoned to the Rose Garden to act as props for Trump’s stump speech.

After all was said and done, ‘To be fair, if President Obama had given a speech like this in the White House, Republicans on Capitol Hill would have been up in arms.’ Indeed, if Obama had done anything like that, Republican heads would have swiveled on their shoulders and their mouths would have erupted with green bile like Linda Blair in ‘The Exorcist.’ After all, they had a full-blown hissy fit when Obama wore a tan suit to the White House briefing room one day.”

Me: More noise from the White House. 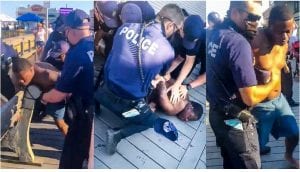 Five New Jersey police officers are being accused of using excessive force after they were seen wrestling a Black man to the ground for allegedly having a open beer at a beach.

Video of the incident, which was said to have occurred at Point Pleasant, was shared on social media. Typically, a ticket is issued rather than an arrest.

Me: They still have not learned Black Americans are people!

Navarro’s op-ed, titled “Anthony Fauci has been wrong about everything I have interacted with him on,” represented his most brazen effort yet to dress down the widely respected immunologist and veteran director of the National Institute of Allergy and Infectious Diseases.

When I was working feverishly on behalf of the president in February to help engineer the fastest industrial mobilization of the health care sector in our history, Fauci was still telling the public the China virus was low risk.

When we were building new mask capacity in record time, Fauci was flip-flopping on the use of masks.

Me: This was a supply chain problem. The issue was where to allocate the limited supply of face masks. Give to healthcare workers or allow citizens to hoard them?  Fauci made the right decision and lied.

Navarro and trump’s son-in-law could not plan their way out of a paper bag. They should not have had to build capacity. Dumb statement by Navarro.

The new head of the U.S. Postal Service established major operational changes Monday that could slow down mail delivery, warning employees the agency would not survive unless it made “difficult” changes to cut costs. But critics say such a philosophical change would sacrifice operational efficiency and cede its competitive edge to UPS, FedEx and other private-sector rivals.

Postmaster General Louis DeJoy told employees to leave mail behind at distribution centers if it delayed letter carriers from their routes, according to internal USPS documents obtained by The Washington Post and verified by the American Postal Workers Union and three people with knowledge of their contents, but who spoke on the condition of anonymity to avoid retribution.

Me: That will “really” help mail-in ballots! Suggest one week for all mail to be delivered locally. Post Office should incorporate intelligent bar coding also to track ballots.

Trump’s claim about more white people being killed by police in the US is misleading.

The Guardian’s investigative project The Counted in 2015-2016 that set out to record all people in the US killed by police showed that Black people in America were more than twice as likely to be killed by the police than white people.

And in 2016 Black men ages 15-34 were nine times more likely than other Americans to be killed by law enforcement officers, and they were killed at four times the rate of young white men.

A similar 2016 analysis by the Washington Post also found that African Americans are 2.5 times as likely to be shot and killed by police offers as white Americans.

Another study published in the American Journal of Public Health in 2018 found that African Americans are 3.5 times as likely to be killed by police compared to white people.