Republicans Built and Own This

And we as Democrats did not resist hard enough and gave in to the Republican message.

It wasn’t the lack of turnout by black Americans causing Trump to be elected. It was not the failure to vote as the numbers of voters exceeded that of the 2012 election. It was the minority of voters who cast their ballots in the “others” column or as the media calls the “anybody but trump or Clinton” vote which was at a historical high. Many voters bought into the Republican message of lies and deceit about Clinton which had been answered years ago, many times over, in multiple investigations of Hillary and Bill Clinton.

In this post, there a little bit of WaPo, some Washington Monthly, and some of me giving an explanation how we arrived to today.  As I stood by, watched, and now experience what this president has brought us, I ask the question of myself; what did we miss along the way as many of us still continue to lock down in our homes. How could we have stopped trump as citizens. I have come to this point in time thinking there may be something different I could have done then just bringing what I consider to be cogent arguments to the table. My hands were  tied and my words on the topic ignored in sounding the alarm. And fair warning don’t argue about your liberty being violated if forced to wear a mask. You are a fool if you venture into public without mask and get within the six foot area of others. There is more to Covid than just dying which is the easy way out in many cases. Once you are on ventilation, you are probably going to die.

Stuart Stevens the strategist for Mitt Romney’s campaign makes the argument of Republicans being responsible for Trump in that GOP Principles paved the Way For Massive Suffering. One of the critiques often leveled at the Repub “Never Trumpers” is; even as they reject the current president’s words and deeds, they fail to assume any responsibility for them. In the end Republicans built today’s moment and crisis while still looking the other way.

“We have it (Covid) totally under control. It’s one person coming in from China.”

More fantasy by Trump which the Republicans enabled and left unanswered.

This comment was made on CNBC’s “Squawk Box” during an interview with Joe Kernen at the Davos World Economic Forum. There were already 500 known cases in China and more unreported cases due to the lockdown in China on reporting and doctors.

“Republicans like me (Stuart Stevens) built this moment and then we looked the other way”. 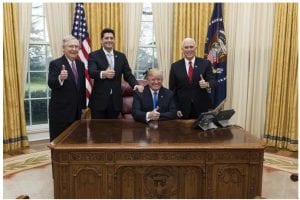 “Don’t just blame President Trump who has been a failure as a president, “blame me (Stuart Stevens)  and all the other Republicans who aided and abetted and benefited from protecting a political party that has become dangerously toxic to America.

Many of us knew better. But we continued to build to this moment and while looking the other way.

We heard the warning sound we chose to ignore, like that rattle in your car you hear which you figure will go away. It didn’t and now we’re broken down, with plenty of time to think about what should have been done.”

The failures of the government’s response to the Covid (coronavirus crisis) pandemic can be traced directly to the fantasies and strategies the Republican Party and promoted over the years. Here are a few:

Masks are useless and a violation of your liberty.

And we can go it alone, the world be damned.

It’s very much time to start having that conversation of reopening the economy and start figuring that out. (Sen. Pat Toomey)

We have to learn to live with this (Adam Brandon, Freedom Works). And used by Trump recently.

How do you rein in some of the tyrannical enforcement? (Andy Biggs, R-AZ)

In order to sell these lies, Republicans rejected facts, science, and math   .   .   .   labeling experts as “elitists”  living in liberal coastal states and accusing them of silencing the “heartland.” The rallying cry of the so-called “populists” during the 2016 election. If we could go back in time    .    .    .

Former OH Gov John Kasich explained how Republicans will react to  a growing potential for a Trump’s loss:

“I’m glad to see some of these Republicans moving the other way but it reminds me of Vichy France where they said, ‘Well, I never had anything to do with that’”

The day after trump is defeated, Republicans will unperson Trump the same as they did GWB and claim they were part of the resistance all along. Donald Who? I never heard of the guy! Why, he was a NYC liberal all along. Now, Tom Cotton    .    .   .    there is a real conservative!

And the day after Joe Biden is inaugurated? Republicans will  suddenly rediscover the federal deficit too.

“If I could go back and redo anything, it probably would have been to slow down the opening of bars, now seeing in the aftermath of how quickly the coronavirus spread in the bar setting (Rep. Governor Greg Abbott- TX).

Abbott’s sentiment is wildly too late as the seed have been planted and many people will die or suffer bodily impairment from contracting Covid.

Republican’s built these last four years and they own it. It is time we take back the nation and repair the damage done to it.