No, it is not “erasing history”

Infidel 753 writes at his own site of the same name. From time to time in the past he has put up several of Angry Bear’s posts on Crooks and Liars. This post (of his), I find interesting as he discusses the history and legitimacy of statues honoring  Confederates and US military bases named after Confederate military leaders.

History needs to be recorded and remembered, regardless of how we today judge the events and people of the past.  What happened is what happened, even when the truth is painful.  But historical memory does not require that we preserve monuments explicitly meant to honor criminals and insult black Americans. 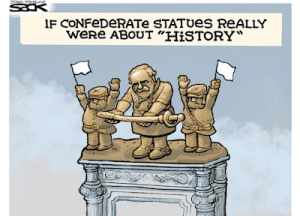 Most of the Confederate monuments now scattered across the country were not built right after the Civil War but between 1895 and 1920, when the post-war progress on civil rights had been mostly reversed and the grinding down and terrorization of blacks reached an apex.  They were less commemoration of history than assertion and celebration of the resurgence of white supremacy.

This is perhaps fitting given that that was the cause for which the Confederates fought.  The Civil War was entirely about slavery — the Confederacy was created solely to preserve slavery.  The declarations of secession passed by the Southern states at the time make this clear.  Any assertion to the contrary is simply a lie.  Yet it’s the people who claim to be concerned about preserving history who keep repeating this fundamental lie about it.

In every other case, the difference between remembering history and honoring its villains does not seem to confuse anybody.  Germany preserves the history of the Third Reich with grim determination, lest forgetting the horrors of the past make it easier to repeat them someday, but it has no statues commemorating Hitler or Himmler.

Arguments about honoring “Southern heritage” don’t hold water either.  The South as a distinct cultural region is at least two centuries old.  Why focus on the four-year period of shame?  The South has produced many great figures before and after that time, including military heroes who fought for the United States rather than against it.  Again, Germans can take pride in centuries of achievement in many fields without defending the twelve years of Nazi atrocities.

It is sometimes said that if Confederate statues are removed, we would need to get rid of commemorations of other past figures who owned slaves or did other things which would be considered immoral today.  It is a valid point that almost any powerful figure from more than a couple of generations ago probably did or believed things which we today would judge abhorrent — and never forget that we do not know how people a few generations in the future will judge things considered normative in our own time.

But there are differences in degree.  Owning slaves in 1800, when slavery was almost universally accepted and had been for millennia, is not the same thing as fighting to preserve slavery in 1861 after it had emerged as the central morally-contentious issue of the day.  Columbus lived in a brutal age, but his atrocities as governor of the Indies were shocking even for that age, and led to his being removed from his position and briefly imprisoned.  Some degree of racism was normative in the 1940s, but Auschwitz was not.

And the Confederate case is unique because these men fought a war against the United States.  That makes it absurd that the country is dotted with statues honoring them, and even more absurd that American military bases are named after them.  I’m aware of the argument that they should not be considered traitors because in those days loyalty was felt more to individual states than to the whole country.  But even if you buy that (I don’t), they were still enemies of the United States and fought a war to break it up.  Admiral Yamamoto was not a traitor to his own country, but we don’t name American military bases after him.

It’s not just that these statues are offensive and degrading to black Americans; it’s that they were intended to be so.  If they deserve preservation at all, it should be in museums, as relics not of the Confederacy but of the age of resurgent racial oppression two generations later, which built them as assertions of its own triumph.  The bases should be renamed, honoring the country’s heroes rather than its enemies.  And as for that stupid flag, the First Amendment protects individuals’ right to display it, but we all know what it really stood for — and it still does.