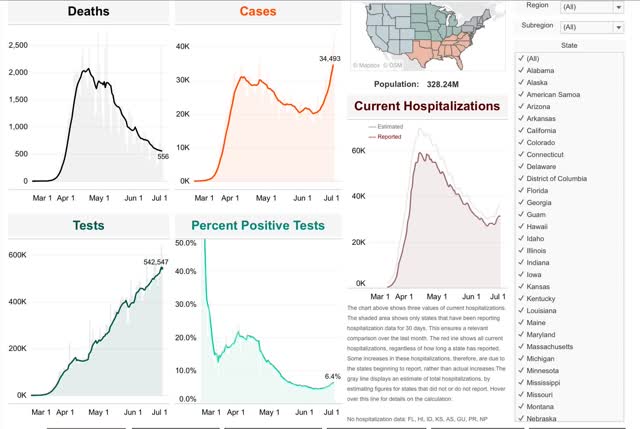 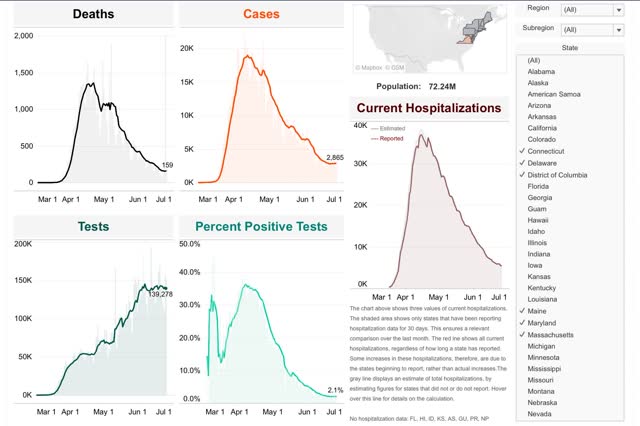 Cases have risen very slightly in the past few days, while hospitalizations have continued to fall. Deaths have flattened.

In the Midwest, cases have risen by about 25% in the past 12 days. Hospitalizations have flattened, while deaths have continued to decline: 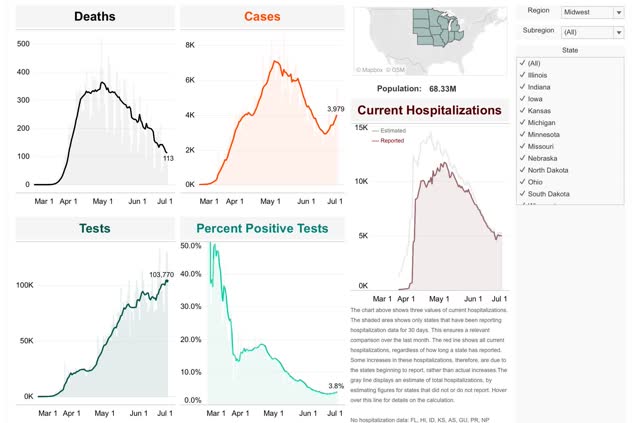 In the northern West, case started rising a month ago, after May 26. Hospitalizations bottomed two weeks later on June 7. Deaths started to creep up at the same time: 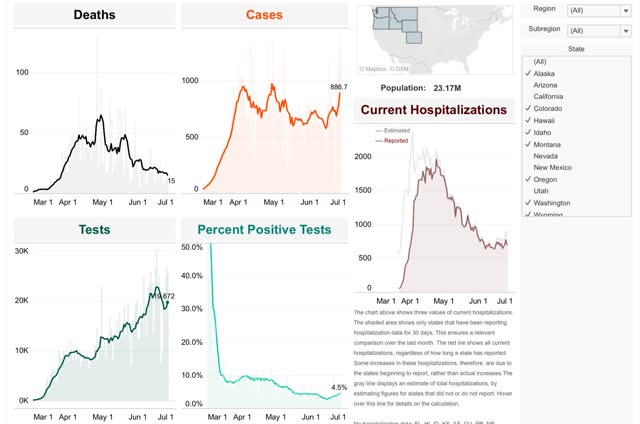 In the Southwest, cases never decreased. But there was an inflection point for increased cases on May 28, which had 3,528 new cases. By June 26, that had more than doubled to 8,758 new cases: 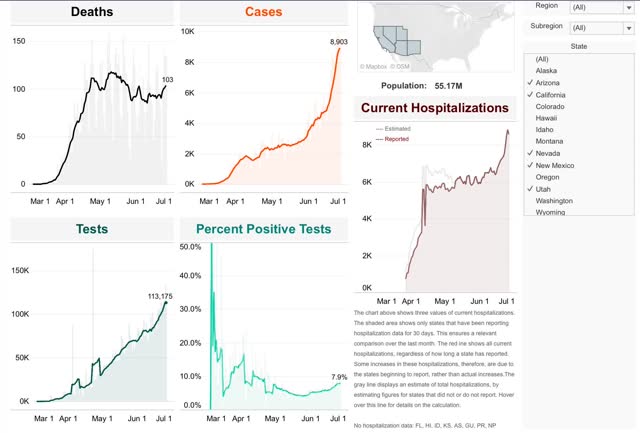 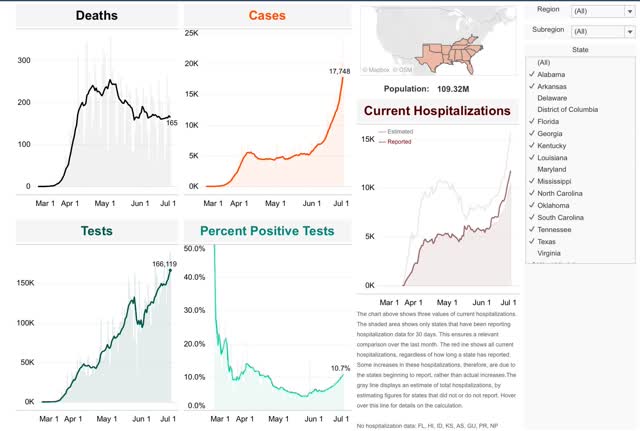 Hospitalizations reached their inflection point on June 6 at 5,791. Since then they have nearly doubled to 10,565. Deaths bottomed on June 18 at 160 and have risen slightly since then to 165.

In short, while there is considerable variation, in general deaths have lagged hospitalizations by about 1 to 2 weeks. We are now nearly 2 weeks after the bottom in hospitalizations for the US as a whole. Thus I expect deaths to start increasing, at least slowly, in the next few days.

Turning to some of the drivers of the increase in cases, here are two charts. The first is a chart of which State have increasing (red and orange) vs. decreasing (yellow) cases in the past week; the second is a chart of mask-wearing regulations by States: 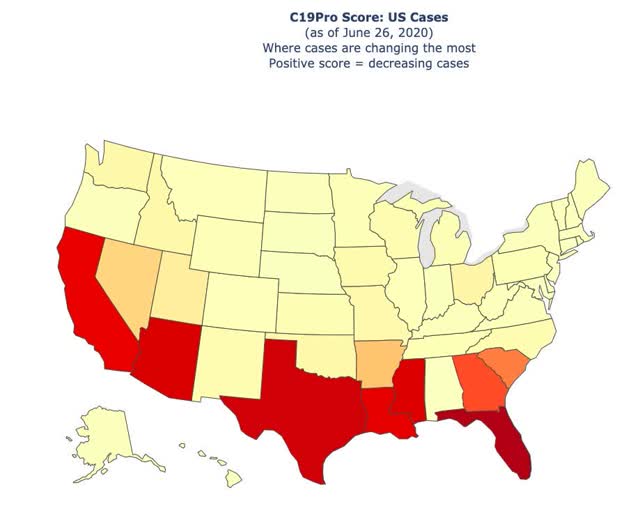 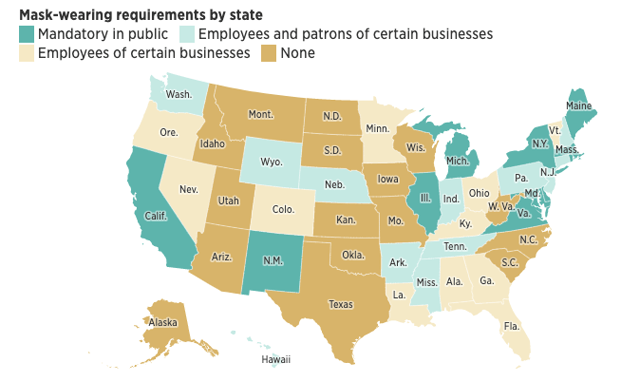 With the very notable exception of California on the one hand, and the sparsely populated States of the northern Plains and Rockies, mask-wearing, or the lack thereof, is highly correlated with increases or decreases in new cases.

Another big correlation with new cases has been restaurant reopening, as shown in the below graph comparing cases with restaurant spending: 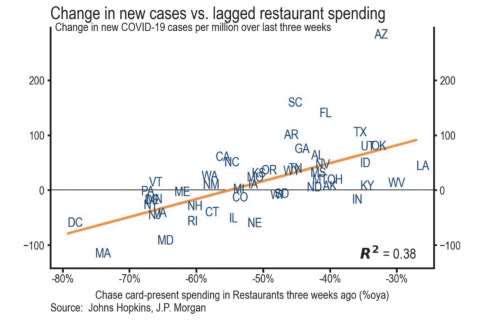 Confined indoor spaces, air-conditioned recirculating ventilation, and the necessary lack of mask-wearing in order to eat or drink sure seems to be a recipe for spreading the virus.

And if the public does not have confidence that the virus has been contained, the economy is not going to be able to sustain reopening for very long, as shown in the below graph of consumer confidence by region: 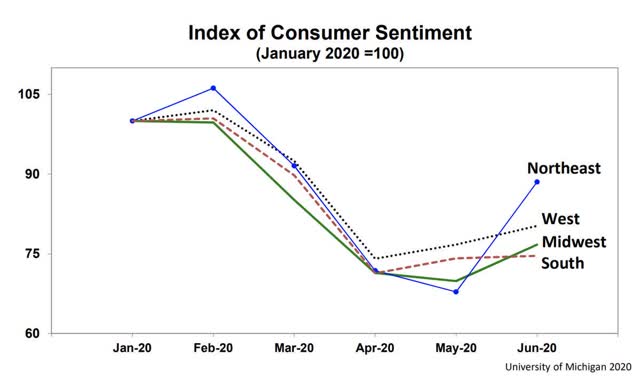 Only in the Northeast, where the virus has been very well contained (for now) has there been a big rebound in consumer confidence.

Finally, it’s worth noting that this is even showing up in the stock market:

As of Friday, the S&P 500 was less than 5% above where it was at its January 2018 peak. If deaths start to rise substantially, as I believe they will, portions of the economy are going to shut right back down again, whether by law or regulation, or simply because customers stop showing up.