Who Ordered This Stuff? 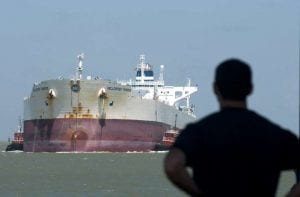 These shipments are planned, Saudis are not sending this over out of the goodness of their hearts. Furthermore, the shipments themselves take roughly 21 days to get to the US. The orders were placed over 3 weeks ago. When you have a lot of US capacity which produces at a higher price and we are seeking to become oil independent and we are seeking to become manufacturing independent; why would you destroy your capability if we want made in America product? Who is the perpetrator?

Bloomberg: “Over 30 tankers laden are set to arrive in the U.S. Gulf Coast and West Coast during May and June, according to ship tracking data compiled by Bloomberg. The more-than 50 million barrels of Saudi crude on the water threaten to disrupt a positive supply development: U.S. crude stockpiles declined for the first time since January and inventories at the Cushing, Oklahoma storage hub contracted by the most in months.

Director of oil and products research at Morningstar Inc., Sandy Fielden: ‘The expected Saudi deliveries could push U.S. inventories back to builds depending on their timing. If the shipments land at a rate that isn’t balanced by falling production or an uptick in exports, then we’ll see a domestic build.'”

What a surprise. What he is saying here is if you see two shipments a week which surpasses demand rather than one shipment per week to match demand, inventory will build once again and prices will drop. Fracking as a business will decrease. Once again, we will be at the mercy of an unstable Middle East and now the Russians.

Unless of course, you do not want to have oil from fracking as your plan is to use MidEast oil up sooner.

Paola Rodriguez-Masiu, a senior oil market analyst at Rystad Energy: ‘If all the Saudi tankers unload, the crude they carry will offset during May almost all of the production reductions from March levels, effectively maintaining the current high storage filling rates.'”

Very Large Crude Carries (VLCCs) routed to the U.S. Gulf include the vessels Shaybah, Hong Kong Spirit, and Dalma according to ship tracking data. Tankers routed to the Pacific Coast include the vessels Sea Jade and Sikinos I or supertankers which will deliver over 45 million barrels of Arabian crude to Gulf buyers and at least 7 million to Pacific users. The volume of oil arriving in May and June is equal to nearly a third of all Saudi crude delivered to the U.S. last year.

An off set to the massive shipments might be slow offloading of the oil at refineries. ” The market is witnessing delays in discharging Saudi oil. For some ships, it has taken about two weeks to unload cargoes, about twice the usual time to finish the job as small ships that are needed to unload have become increasingly scarce.”

Even with higher prices on Saudi oil, US prices for gasoline and other products will again drop. “Oil imports from Saudi Arabia are not set to slow down anytime soon even as the kingdom deepens its production cuts and raises prices for June supply. Plus, a true demand recovery worldwide isn’t expected for at least another year.”

Is somebody in charge here?