I frequently read a debate about whether, when assessing anti covid 19 performance, one should look at deaths per capita or deaths on days since 1000 deaths. Like everything involving Americans, this has become a pro v contra Trump debate — clearly he wants deaths per capita (and the absolute number of tests performed).

The arguments are as follows. for number of deaths on time since a certain number was reached, it is argued that all countries are at the negligible fraction of people are resistant (naturally exponential growth) stage, so the relevant variable is rate of growth of cases (or deaths). So cases now divided by cases a week ago and not by population.

The counterargument is that, come on it’s obvious.

I think that it is natural to expect a transition from roughly the same growth (no matter what population is) to cases (very roughly) proportional to population. All of this is during the neglible fraction resistant phase.

I am going to set up a straw man and knock him down with a silly super super simple model. So the straw man is that it is reasonable to assume that if two countries have the same number of cases at time t, then they will have similar numbers later. The silly model is that people live on a giant chess board (1000 squares on a side) and infect people who share an edge. This gives R_0 between 2 and 3. So say start with two cases, one in each country. Straw man says there should be the same number of cases in each country in each subsequent period.

So straw man concludes that there are never any cases in the lower right or upper left. This can’t be right.

Now I will discuss a model which is slightly less silly. Assume most transmission is local so the infected and the infector are in the same country. Assume people are infectious for one period and that, during tht time, each infected person infects n nearby people. Also assume lower rate of distant infection, so an infected person infects someone chosen at random in the whole world with probability m less than 1 less than n.

This distant infection seeds a new outbreak with a new patient 1.

Assume that at t=1, each country has the same number of infected people.

If m is much less than n, then, at first the rate of growth in all countries is roughly n. But eventually x_(it) becomes proportional to population_i .

As t goes to infinity, the fraction of infected people infected in the outbreaks which had already started at t=1 goes to zero. So in the medium run (after a lot of long distance transmission but before there is a significant fraction of resistant people) the infection rates per capita converge.

OK the bit about initial growth is similar conditional on similar numbers infected at t=1 sure fits the data (where t=1 is t when the number of infections passes say 1000). Thus people could talk about “days behind Italy” and accurately predict the number of cases (and not change how many days behind different countries are).

The alternative is to claim this figure illustrates a pure coincidence. 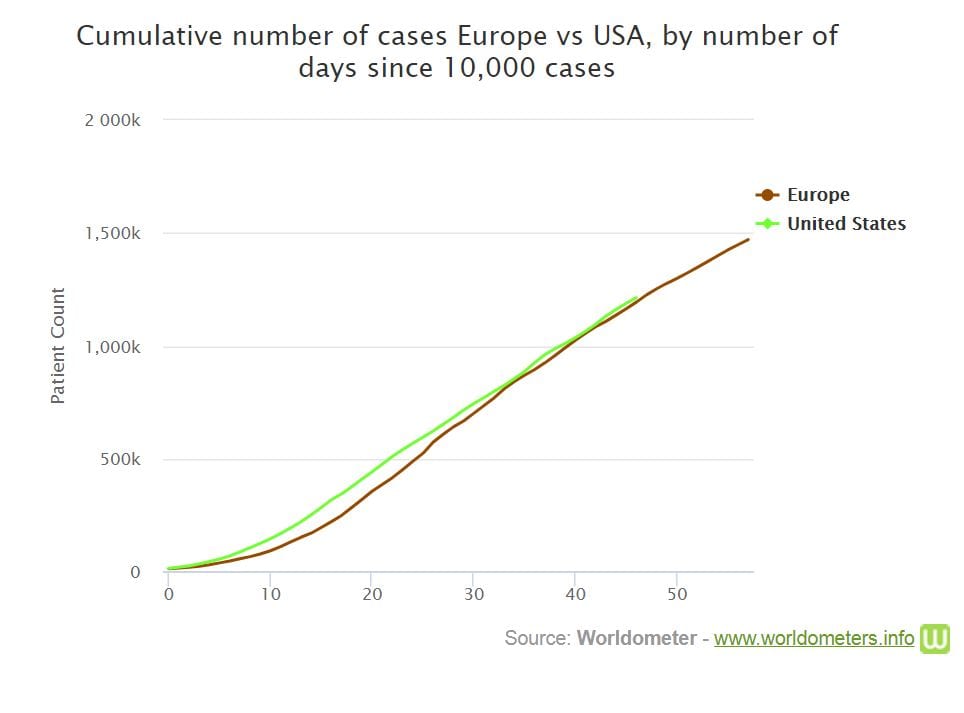