It should be worth noting that the federal deficit under Trump is already at 5% of GDP even before the Coronavirus stimulus begins. 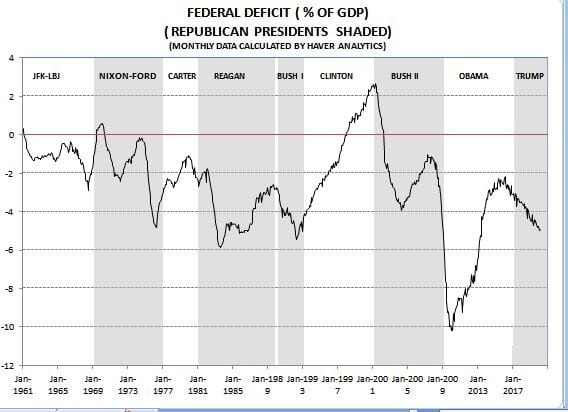 Interestingly, if you look at the long term record the only policy or strategy that fits the data is the Republican policy of starve the beast. That policy is to enlarge the  federal deficit so much when they control the purse strings that democrats will be unable to enact policies increasing spending that benefits the lower and middle classes.  That is why you repeatedly see a pattern of republicans presidents leaving office with a much larger deficit than they inherited while democratic presidents reduce the deficit..  With US savings rates so low this forces the US to borrow abroad to finance the savings-investment gap. We lucked out that in the 1980s OPEC and Japan had  savings surpluses that they used to finance the US deficits.  Under Bush it was the Chinese that had a savings surplus to invest in the US.  But OPEC and Japan no longer have surpluses to finance the US deficit and the Chinese have started to draw down their savings as they shift to consumption led growth.  Because the Japanese and Chinese had large surpluses to invest the  long feared crowding out worked through the dollar and large trade deficit rather than higher interest rates and weakness in the credit sensitive economic sectors. The hollowing out of US manufacturing was a direct consequence of the republican tax cuts.