The argument has been, if people like their private and company sponsored insurance plans they can keep them; but can they afford to do so?

In a recent LA Times and KFF survey, 40 percent of respondents said they had difficulty affording health insurance or health care or had problems paying medical bills. An approximate one-half of respondents said they or a family member skipped or postponed getting health care or prescriptions in the past twelve months due to cost concerns. Those with higher deductibles were more likely to report problems with affordability and were likely to say their insurance worsened over the past five years as compared to people with lower deductibles. Over the last decade, deductibles have increased 162% (see chart below).

The annual Kaiser Family Foundation Employer Health Benefits Survey: In 2019 the average annual premium for single coverage rose 4 percent to $7,188, and the average annual premium for family coverage rose 5 percent to $20,576. On average, covered employees contributed 18 percent of the cost for single coverage and 30 percent of the cost for family coverage with variation across firms. Of the 9,000 firms the survey was sent to, 4,395 firms answered this question of whether they offer healthcare insurance for a response rate of 58 percent.

Fifty-seven percent of firms offered health benefits to at least some of their workers. Smaller firm employees faced a higher risk of affordability especially during recessions. Fifteen percent of all covered workers including the 35 percent of covered workers in small firms are in plans with a worker contribution of more than half of the premium for family coverage (2019). In firms with a high percentage of low-wage workers, the average worker’s share for family coverage was 41%. This is many ways to say the same thing, the cost of healthcare is increasing and private company plans may no longer have a lessening capability to pay for healthcare.

Employer-sponsored health insurance is the largest source of coverage in the United States, covering about 153 million nonelderly people. I am sure many people would like to keep the private healthcare insurance and pay less for premiums than what they are.

Premium and Deductible Increase Charts and key thoughts after the leap 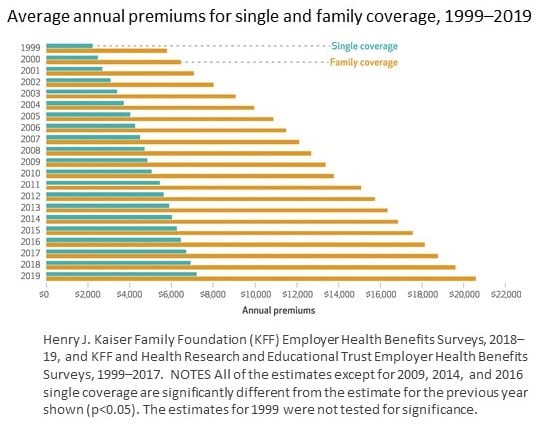 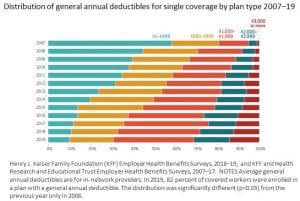 Health Benefits In 2019: Premiums Inch Higher, Employers Respond To Federal Policy You will not be able to get the full report. You can see the abstract on Health Affairs.

KFF 2019 Employer Health Benefits Survey The KFF survey was the basis for the Health Affairs article.