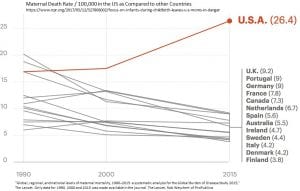 I told the story of a white upper middle class couple, Lauren Bloomstein a nurse and her husband Larry a surgeon. They went to the hospital to have their first baby. Lauren was a healthy young woman who did everything right. Unfortunately Lauren’s OB before and during her delivery missed many of the signs she was suffering from preeclampsia or high blood pressure. Lauren died after giving birth to a healthy baby girl. It is not unusual for doctors failing to heed the warning signs a women or her symptoms are alerting them too.

The warning signs of life-endangering problems were there, were missed (pain in the kidney area), or ignored (abnormal high blood pressure for Lauren). Excuses for other causes of the pain (reflux) were made, and pain killers administered to dull the pain and other symptoms (blood pressure) not explored while she deteriorated in front of her husband who suspected preeclampsia. The missing part of this was the protocol to diagnose early on and prevent Lauren from slipping into late stages of preeclampsia. This is not an isolated incidence as the deaths of women giving birth keep increasing as evidenced in the chart.

Even with the PPACA, expanded Medicaid in place; and when compared to their Canadian sisters, American women are three times more likely to die from the start of a pregnancy up till one year after the birth of a child (defined by the Centers for Disease Control). The death rate for American women is 26.4 deaths per 100,000 as opposed to 7.3 deaths per 100,000 in Canada (Chart). The ratio worsens when compared to Scandinavia countries as American women are six times as likely to die as Scandinavian women.

There are two stories, one for economically secure women and another for minority, native American, rural, and lower income women.

The statistics worsens for women of color with their being more likely to die in pregnancy or childbirth and are nearly four times more likely to die from pregnancy-related causes than white women. In high-risk pregnancies, African-American women are 5.6 times more likely to die than white women. Amongst women diagnosed with pregnancy-induced hypertension (eclampsia and pre-eclampsia), African-American and Latina women were 9.9 and 7.9 times in danger of dying than white women with the same complications. Native American and Alaskan Native women experience similar discriminatory care. Half of all U.S. births are covered by Medicaid and covers women up to two months past delivery leaving a substantial gap after child birth when other issues can arise.

Barbara Levy, vice president for health policy/advocacy at the American Congress of Obstetricians and Gynecologists; “We worry a lot about vulnerable little babies and we don’t pay enough attention to those things catastrophic for women.”

The emphasis has been on safe baby care and safe birthing which lead to a significant decline in baby mortality. As reported in a Propublica, NPR report, the difference in “maternal mortality numbers contrast sharply with the impressive progress in saving babies’ lives.” Maternal death rates while giving birth and up to one year later has increased by an approximate 10 deaths per 100,000 since 2000 till 2015 or greater than the 9.2 deaths per 100,000 in the U.K, (Chart).

In my email account, I found my usual Health Affairs article with a lead off title “The Maternal Health Crisis: Policies of 2020 Candidates” 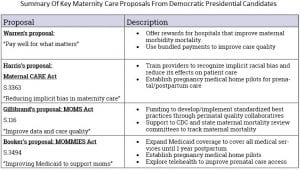 “Many of the Democratic presidential candidates met in Columbia, SC at the Planned Parenthood Women’s Health Forum to share their reproductive health proposals, including plans for maternity care. On Thursday, June 26th, they will engage in their first debate. Donald Trump launched his re-election bid on June 18th, 2019. While his campaign website does not include any specific reference to maternal mortality, members of his administration have recently brought attention to rural maternal health challenges.

This renewed focus on maternity care is desperately needed: U.S. rates of maternal mortality are the highest in the developed world and have been rising since the 1990s, with women giving birth today more likely to die in childbirth than their mothers. These adverse outcomes are also marked by significant racial disparities, with non-Hispanic black and American Indian/Alaska Native women at least 3 times as likely as non-Hispanic white women to die around the time of childbirth.”