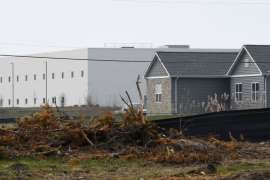 “Six miles west of Lake Michigan in Mount Pleasant, Wisconsin lies a cleared building site half again as big as Central Park and ready for Foxconn Technology Group’s $10 billion liquid-crystal-display factory. Contractors have bulldozed about 75 homes in Mount Pleasant and cleared hundreds of farmland acres. Crews are widening Interstate 94 from Milwaukee to the Illinois state line to accommodate driverless trucks and thousands of employees. Village and county taxpayers have borrowed around $350 million so far to buy land and make infrastructure improvements, from burying sewer pipes to laying storm drains.”

The only thing missing to make this site a reality is “Foxconn.” In what could still turn out to be one of the biggest fraud ever, Foxconn has backed away from the table and then came back.

As of December 2018, the Taiwanese based supplier to Apple has spent 1% of its promised investment in the new US manufacturing facility . . . $99 million. Along with the disappearing promised investment could go the 2080 jobs planned for 2019. The same as any Township Planning Commission might do, Mt. Pleasant is waiting for the factory building plans to be supplied by the hard to find Foxconn contractors. Meanwhile the Mt Pleasant and Racine County are far out on a financial limb in supplying the necessary land needed and other requirements to make the site viable.

“In January, Foxconn said it was backing out of the plan to build an LCD factory in the village, citing high U.S. labor and material costs. Days later, after a phone call between Mr. Trump and Mr. Gou, Foxconn reversed course and said it would go ahead with the facility making small screens, adding some other functions.”

The local population of 27,000 remain skeptical it will ever be completed.

The first of Many to Come? As Indonesia plans to move its Capital, Yessenia Funes, Microsoft News

On several occasions, I have been to Jakarta to conduct meetings at a plant just outside of the city. The area is beautiful and tropical near the plant. We did not stay but two days at a time as Jakarta is not a friendly place for Americans in general. Monetarily, the exchange rate is relatively high with regards to Rupiahs to the dollar. We elected to use credit cards as we would never be able to get rid of the local money. 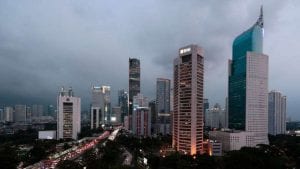 Indonesia has decided to move its capital from Jakarta as the city is slowly sinking and will be overwhelmed by the ocean by 2050. Jakarta has dropped 13 feet in the last 30 years and the ocean is expected to rise 20 inches by 2050. The city is home to 10 million people, is congested as many of the cities in Asia are today, and suffers from pollution and global climate change. The drawing of fresh water for human use has caused the land to drop and compact over the years also.

The US has a history of turning people away whose lives are endangered in their home lands. 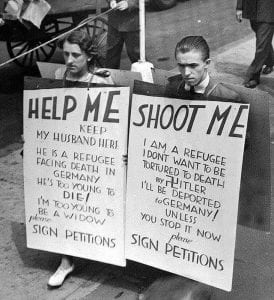 A State Department telegram to the people on MS St. Louis: “passengers must “await their turns on the waiting list and qualify for and obtain immigration visas before they may be admissible into the United States.” The message to people fleeing for their lives from terrorism and the threat of death has not changed much over the years. During WWII, the Nazis exploited the unwillingness of other nations to admit large numbers of Jewish refugees to justify their anti-Jewish goals and policies both domestically in Germany and in the world at large. The MS St. Louis returned to Europe and landed in Antwerp. The Jews aboard ship were split amongst 4 countries. Many succeeded in getting US Visas or were able to hide from the Germans. 254 did die in concentration camps.

The man depicted in the picture is Otto Richter who was deported from the US after illegal entry. Protesting a return to Germany, it was reported he either went to Belgium or Mexico. He was fleeing persecution by the Nazi.

11 months earlier the Trump administration separated Byron Xol from his father David after they arrived from Guatemala. It was done under the zero tolerance program. David Xol was deported back to Guatemala despite requesting asylum. Byron was left in the United States and in custody due to not having any relatives or known sponsors. A lengthy court fight ensued with the Sewell family hiring an attorney to represent their interests in Bryon. The Sewells talked with David (father) and both he and his wife agreed to allow the Sewells sponsor Bryan in the US.

As it was Byron’s father David was an evangelical Christian. He had requested asylum for both he and Bryon. According to a court document, David Xol was attacked and tortured and Byron’s life was threatened by MS-13 gang members in 2017 because Xol preached to his co-workers about his religious beliefs and against leading a life of crime.

Some things just never change when it comes to refugees and freedom.