There He Goes Again

On my personal blog, I mentioned that Tom Nichols is absolutely unwilling to discuss the run up to the US/UK?Australian invasion of Iraq. He is careless about facts and expresses contempt for even considering the official conclusions drawn by Hans Blix. He will not face evidence and has total contempt for expertise.

He asked me to stop replying to him and I did, but I have proof that he is wrong.

The man can’t handle facts and he refuses to listen to actual experts on the topics on which he makes assertions based on prejudice, stubborness and tribal loyalty.

Now I am here to mentoin that he’s done it again.

He has a little twitter exchange with Mike Gravel in which he demonstrates, again, his contempt for data and experts. 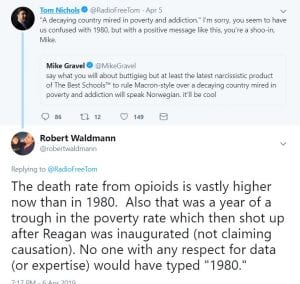 Nice come back. At a level with “There you go again”*. But stupid. First the rate of opioid overdose deaths is vastly higher now than in 1980. The drug problem of the 1960s was minor compared to the current crisis. By 1980 the heroin epidemic had passed. It’s true that there was a crack epidemic during the Reagan administration. But the big drug in 1980 was marijuana which is no longer a problem, because our generation (the pot heads of the 70s) are making the laws and know it was never a big problem.

But Nichols really demonstrates his contempt for data and expertise by asserting that “poverty” and “1980” go together. There is a technical literature on poverty. The first statistic is the official poverty rate. That rate was low in 1980 and shot up as soon as Reagan was elected (I am not asserting causation — it had more to do with Volcker). Nichols has a vague sense that the country was in bad shape in 1980 then Reagan saved it. He can’t be bothered to look up the relevant official statistics before tweeting. He places his prejudice and conservative tribal loyalty above the calculations of subject matter experts, because he has no respect for expertise. 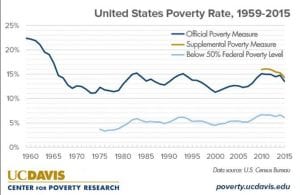 * (Reagan dismissing an accurate warning from Carter — Reagan was so dumb he used the line again with Mondale who noted that Carter’s warning had been proven correct, enough US adults are so dumb that they re-elected Reagan anyway, then pundits contempt for facts is so profound that “there you go again” is remembered as a successful line and the fact that Carter was right and Reagan was wrong (and ignored the very specific warning to not use the line again)) is trivial, because style matters more than substance.

Addiction is even harder to measure than poverty. A statistic which is widely used by experts and people who have any respect at all for expertise is the rate of death from overdoses. This isn’t a measure of the number of addicts because opiates are much more likely to kill than other addictive drugs including drugs with horrible consequences such as crack and meth. However, everyone who knows anything about addiction must confront the fact that the overdose death rate is vastly higher now than in 1980. I had a bit of trouble finding a graph that goes back that far so here are two 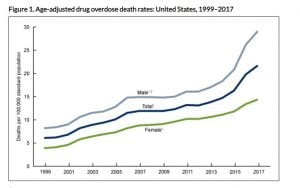 I don’t know why the CDC insists on snippets, but the two graphs make clear that there was an increase in hte overdose death rate from 1980 through 1999 followed by a Huge increase since then. We might wish we could go back to the Carter years of equal income distribution, extraordinarily rapid employment growth and low drug addiction, but it won’t be easy. It might not even be possible if people who lament the end of expertise continue to put their prejudice and tribal loyalty above even a glance at the data.

Covering Up The Coverup