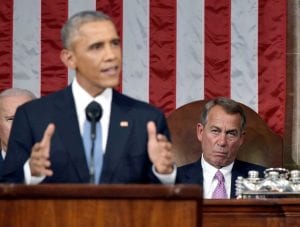 Andy Borowitz: “Representative Alexandria Ocasio-Cortez’s facial expression during the State of the Union address came under continued attack from Republicans on Thursday, with the former House Speaker John Boehner joining the chorus of disapproval.

‘When I saw her with that pained expression on her face, I couldn’t believe my eyes,’ Boehner said. ‘It was like nothing I had ever seen before in my life.’

The former Speaker said that Ocasio-Cortez broke his ‘No. 1 rule’ of reacting to a State of the Union speech: ‘No matter what the President is saying, be sure to look cheerful and upbeat at all times.’

‘I didn’t always agree with what President Obama had to say over the years, but I always kept a smile on my face,’ he said. ‘I think if the congresswoman went back and looked at video of me and my fellow-Republicans during the Obama speeches, she could learn a lot about maintaining a non-stop happy facial expression.’” Andy Borowitz, The New Yorker

Actually Representative Alexandria Ocasio-Cortez’s facial expressions reveals quite lucidly what many of us feel in listening to the garbage spewed forth by Trump and supported by Republicans with nary a word out of fear. AOC portrays what we feel . . . disgust.