Is this Short Covering, or Are the Suckers Flooding the Market?

Via ElNuevoDia at LG&M, “Gamblers are now betting that Kavanaugh will not be confirmed.”

The market in question, at PredictIt, seems rather straightforward. Note, though, that the contract only opened five days ago (18 September) and traded consistently in the 60-70% range through yesterday (22 Sep), closing at 61% and only reaching as low as 55%. 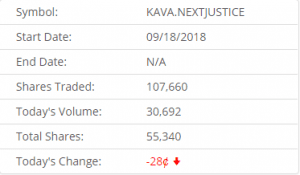 In the past two hours, more than 20,000 transactions has occurred, which is greater than the volume on any previous day, with no trade higher than 60, and none in the past hour above 42. (It is 9:13 EDT as I write this.) The 24-hour graphic is impressive in its consistency:

The open question is whether the buyers at the lower level are the same people who were selling in the 60s and 70s (the ratio of Trades to Shares is roughly 2:1; some of the previous activity was clearly coverage) locking in a profit against new, relatively low-information buyers, or if the route is on.

It appears the opportunity for buying at the bottom has passed; it remains to be seen if the market will stabilize at low levels or recover as time passes without new information and/or the termination of the contract.