It is All in the Timing 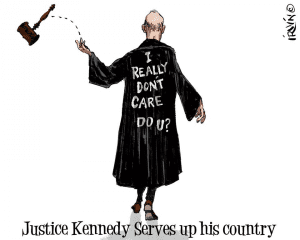 In his editorial “Say Hello to Your Boy. A Special Guy,” Josh Marshall at TPM had this to say:

“When I first read the Times story I wasn’t sure whether the younger Kennedy (Justin), whose title was Managing Director and Global Head of Real Estate Capital Markets, would have been someone to actually make loans to someone like Trump as opposed to overseeing more complex or synthetic efforts like mortgage backed securities and such. But it turns out he definitely was. The FT says Kennedy was ‘one of Mr. Trump’s most trusted associates over a 12-year spell at Deutsche.’ A review of Kennedy’s bio suggests those twelve years were 1997 through 2009 – key years for Trump.”

Other presidents and their staff have lobbied SCOTUS justices to see if retirement was being thought of by them. I do not recall any of the justice’s family having a business relationship with the president pre-presidency and perhaps others who are closer to the courts can offer up more information. “During Justin Kennedy’s tenure, Deutsche Bank became Trump’s most important lender, dispensing well over $1 billion in loans to him for the renovation and construction of skyscrapers in New York and Chicago at a time other mainstream banks were wary of doing business with him because of his troubled business history.”

The loans occurred when other banks felt Trump and his businesses were too much of a liability with his multiple bankruptcies. Deutsche Bank (holding company) was also one of several banks which was also placed under tighter scrutiny because of its past practices. Most recently, Deutsche Bank failed a Fed stress test.

Even though I disagree with some of his opinions, I would not call Justice Anthony Kennedy a fool. He is an intelligent man who has swung the court in the direction he wishes it to go with each of his votes. Given that, he also knows his retirement from SCOTUS will have an adverse impact upon the citizens of this nation which will result from the candidate Mr. Trump selects to replace him. Justice Kennedy simply does not care and his timing was intentional.