In Part 1, [here at AB] I looked at factors that tie closely with Total Capacity Utilization (TCU), and saw no reason to believe that TCU is about to surge.  In Part 2 I’ll be looking at more general ideas that reinforce my lack of optimism.  My underlying assumption is that for TCU to surge, the economy has to surge and pull it along.

In this post, Edward Lambert takes a deeper look at capacity utilization, with a strong suggestion that it’s more important to the economy than the 16% contribution that industrial production makes to the total.  So maybe I have my assumption backwards.

First a H/T to Mish.  Graph 1 is one He recieved from one of his readers, with the quote: “It seems rather unlikely that private economic activity is poised to accelerate under these conditions.”  Mish concurs, and so do I.  The graph shows Growth in Bank Lending Per Capita (Black) and Real Final Sales Per Capita (Blue).  Both are rolling over from extremely anemic recovery peaks. 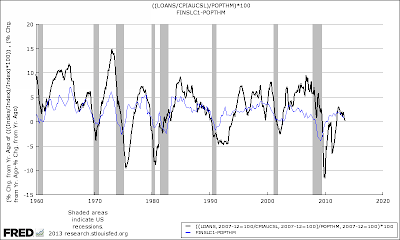 Next, a huge H/T to Stagflationary Mark at Illusion of Prosperity, who sometimes looks at data and relationships that I would never even think of, and often goads me into a different perspective.  He has graciously allowed me to use some graphs from several of his recent posts.   Graph 2 shows the YoY % change in capital goods orders for non-defense industries.  Mark added a twelve month moving average which is clearly sloping down, and is now at 0%.   In the following graphs, all trend lines and modifications are Mark’s. 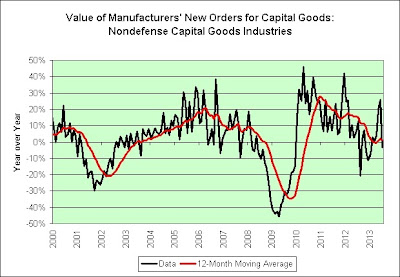 Graph 3 shows Real Manufacturers’ Sales per Capita.  I’ve added TCU in blue.  Since the beginning of this data set in 1990, it looks as if these sales have to grow in order to keep TCU constant.  Alas, though, they’ve leveled off. If TCU is going to surge, I’d expect robust hiring in manufacturing industries. Graph 4 shows the number of employees in goods-producing industries.   In what passes for a recovery in this century, it’s approaching flat-line at a level equal to that of 50 to 60 years ago. 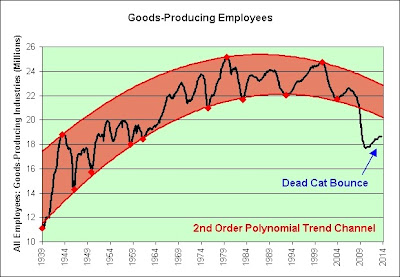 And, lest you think non-manufacturing employment can bail us out, Graph 5 shows the employment level in sales and office occupations.  Since the GR, it has made no recovery at all, and is now at a level from 20 years ago. 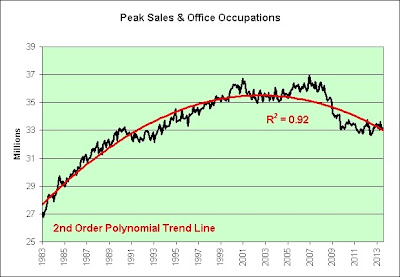 But maybe none of this matters in a service-based economy.  Graph 6 looks at the YoY % growth in personal consumption expenditures on services (PCES). Surprisingly, though, expenditure growth in that area has been declining with a series of lower lows and lower highs since 1980.  The post GR high is at the level of the previous recession’s low, and the long range decline in growth rate resumed a year and a half ago. 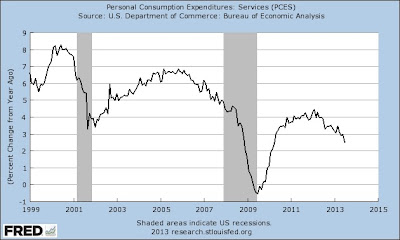 This is probably why the fraction of employees in service industries has flat-lined, as shown in Graph 7. 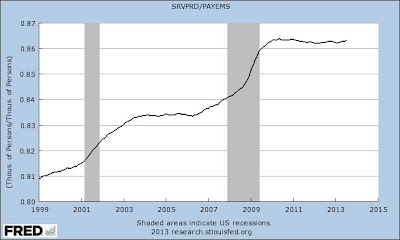 I’ll wrap up with one last consideration.  Our economy is about 70% consumer driven.  If GDP and TCU are going to surge, it will be largely due to a surge in spending.  Contrary to what economists will tell you, for the majority of the population spending is driven by income.  Or, more specifically, by real disposable income.  Graph 8 gives us a look at how that is going, YoY % change, semiannual data. 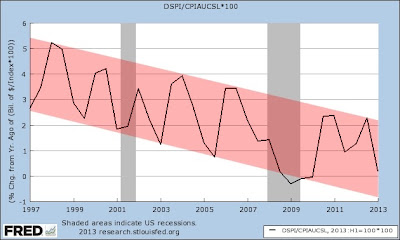 Not so well, as it turns out.

This doesn’t mean we’re going to slip back into a recession next week.  I think a Japan-style decades-long doldrums is a more realistic possibility.  All that requires, as graph 9 indicates, is to keep doing what we’ve been doing this century.  Graph 9 – US Real GDP/Employed person divided by Japan Real GDP per Employed Person, is dead flat this century 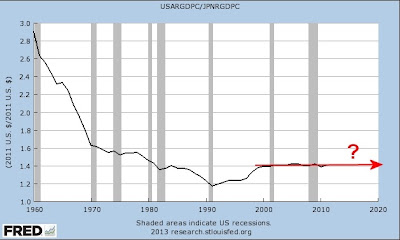 But I can’t think of any reason to suspect that I am.