The Standard Deviation of NGDP Growth Since 1950

This is a follow up to The Standard Deviation of NGDP Growth During the Great Inflation.  In that post I showed this 100 point scatter graph of the 12 Quarter average Compounded Annual Rate of Return [CARC] of NGDP vs 12 quarter Standard Deviation [Std Dev] of CARC from 1954 to 1978.  It then occurred to me that some of those red dots that have fallen down close to the yellow trend line might be misallocated.  What they represent are 3 quarters in 1957 when Std Dev had a chance to settle down between recessions, and the tumble down of Std Dev in the early 60’s as the high Std Dev values of the the 1960 recession fell out of the 12-point data kernel.

This is illustrated in Graph 1. 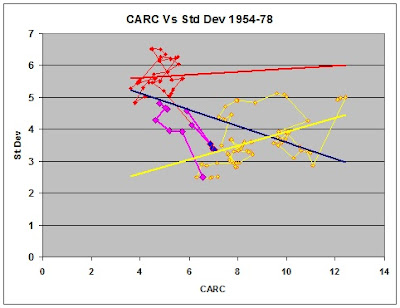 The red dots are data points from 1954 through Q1 ’62.  The yellow dots are from Q1 ’64 on. The blue dots are the three low Std Dev points from 1957, and the pink dots represent the transitions in and out of the 1957 blue-dot data, and the tumble down in Std Dev from Q2 ’62 to Q4 ”63.  The original blue trend line is retained for comparison.  Note that removing these three blue and 8 transitional data points from the pre-1964 data set causes the negative correlation of that period to completely evaporate.

This might seem a bit arbitrary; but now we can observe a more tightly packed red data set, and the behavior of the pink data points does seem to be unusual.  The string of high side outliers in the yellow data set occurs in 1971-2, and is associated with the 1970-71 recession. 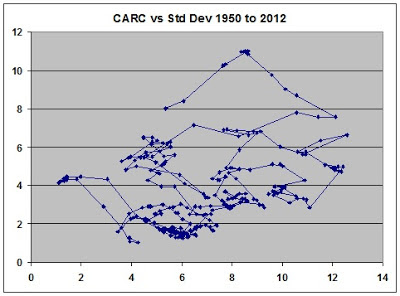 I see the great majority of these points clustering or stringing out along imaginary upward sloping lines that suggest coherent data subsets, and a relatively small number of points [39, or 15.4% of the total] where the data is in transition between sets.

I parsed it out as shown in graph 3. 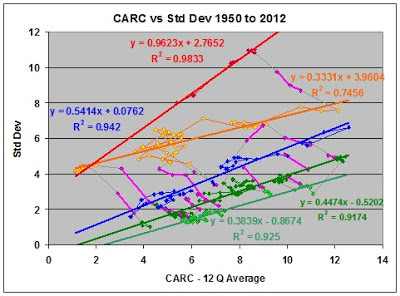 The data points are color coded to correspond with the straight lines that best fit each subset of data, describing 5 distinct realms.  Equations for the lines and R^2 values are also presented in corresponding colors.

The 39 light green dots represent the lowest Std Dev to CARC relationship.  The 72 dark green dots represent a slightly higher relationship. These two subset occur across all decades from the 60’s on in times of stable NGDP growth, i.e times outside of recessions.  There are 41 blue points, representing a medium-high relationship.  These occur when the economy is either in or coming out of a recession.   The 53 yellow points represent a high Std Dev to CARC relationship.  This has occurred during especially severe recessions, or when recessions repeat within the 12 quarter data kernel.  The 8 red dots at the top of the graph are ultra-high.  They demonstrate the severe economic instability of the early post WW II years.  Four of these subsets exhibit extremely high R^2 values, above 0.91; and the fifth  [yellow] is quite respectable at 0.74.  The 39 pink dots occur in discrete short periods when Std Dev rises or falls sharply.

This is an unusual way of looking at GDP data, but I feel pretty good about it, because the linear subsets sort themselves out quite reasonably, and to my eye do not look contrived.  Also, the data points of each subset generally follow the trend lines, in either clusters or strings, for several consecutive quarters.  These subsets are trend stationary along the entire time span of the FRED data set, irrespective of inflation or disinflation; high or low levels of NGDP growth; and whether CARC is rising or falling.  This suggests that the relationship between CARC and Std Dev is not random.  Rather, it is deterministic, and also quantized.  I’m reminded of the chart of nested Phillip’s curves Noah Smith posted, and the quantization of electron energy levels diagram shown here.

To bring this back into the real world, Graph 4 shows the 12 period CARC average from 1950 to 2013, with the CARC data points color coded to correspond with graph 2. 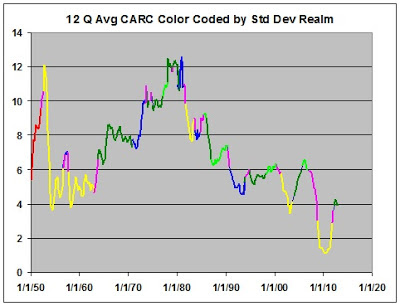 The color coding is indicative of the economic conditions as described for Graph 3.   Note that each of these data sets is coherent, irrespective of the inflationary environment or the long trend NGDP growth level.  It is the presence or absence of recessions that mainly determines the realm in which the Std Dev of CARC resides. Outside of recessions, the data resides along one of the green lines.  When not following any of these lines, the CARC – Std Dev relationship is transitional, moving into and out of recessions.

What strikes me is that I simply eyeballed straight lines through this scatter of data as an exercise in curiosity, and it wound up making some sort of coherent sense. Each of the realms associated with the best fit lines is trend stationary in a way that is robust across time and varying economic conditions.

But NGDP growth, per se, tells you absolutely nothing about either the rate of inflation nor the Std Dev realm.  So – the big question in my mind is this: how can NGDP targeting be expected to lead to controlled, relatively stable economic growth at any desired level, unless you can also control not only the underlying rate of inflation, but also which Standard Deviation realm you end up in? 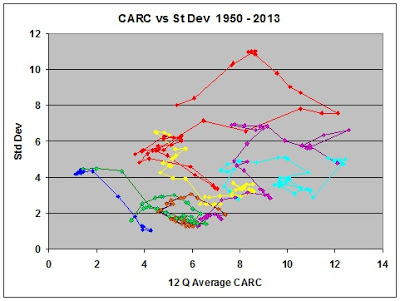 Note three things. 1) As the data moves across time, when it gets to one of the realms described by Graph 3, it tends to linger there.  These trend stationary realms have real traction.  2) Transitions generally take a short, quick route to the next trend line.  3) Since 1980 there has been a choppy but relentless migration to lower and lower NGDP growth.  We are now stuck in the worst recovery on record, and the lowest growth period ever to occur outside of a recession.  In fact, NDGP growth is now lower than that which has occurred within most recessions.

Whether fiscal policy, monetary policy, trade policy or something else I can’t think of  is to blame, this is, to borrow a phrase from my seven-year-old granddaughter Emily, a “total epic fail” of economic policy.  It is grim on a scale unprecedented in the post WW II period.