We saw the same basic map here in 2008, in the strong Red countermovement among Appalachians and Okies:

And here, showing where Clinton dominated over Obama among Democrats in the primaries: 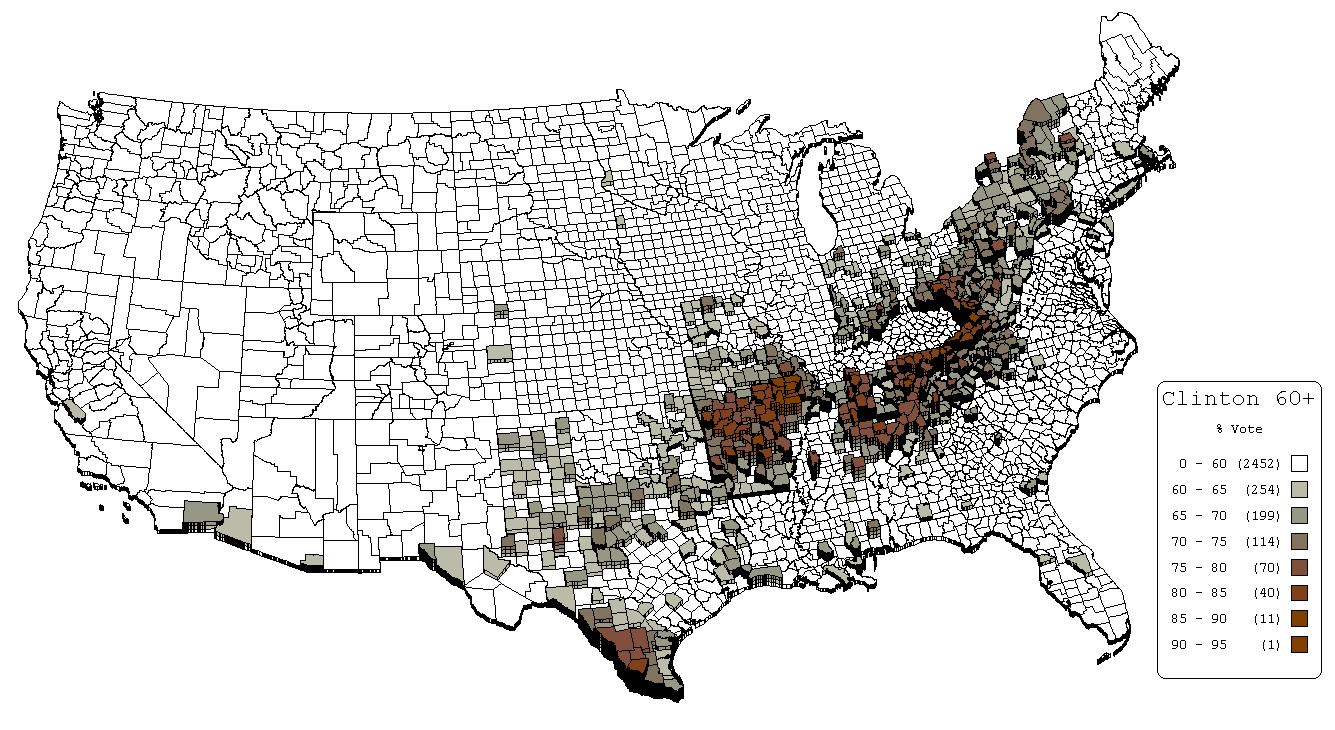 Both Steve Sailer and Senator Jim Webb link this pattern directly to the dominance of (white) Scots-Irish character and culture in Appalachia:

John McCain did best relative to Bush in 2004 in Scots-Irish states like Tennessee, Arkansas, and Oklahoma. McCain is Scots-Irish himself and is very much in the Andy Jackson Scots-Irish tradition of patriotic pugnacity.

As Webb says in his 2004 book, Born Fighting: How the Scots-Irish Shaped America (here characterized by , the Scots-Irish are a particularly pugnacious people, self-reliant and hyper-individualistic, who place honor above profit.

If you want to understand that character and culture, I can’t do better than  recommend a darned good novel: The Candlemass Road by George Macdonald Fraser of Flashman and Steel Bonnets fame (himself an utterly unreconstructed reactionary of Scottish descent who nevertheless, rather paradoxically characterizes the book by saying it’s “a rather dark morality tale – at least I meant it to have a moral.”)  “Dark” hardly says it; “bleak” is more like. It portrays a Scottish border culture of unrelenting, murderous revenge battles among clans. (One of the leading clans in the novel being…the Nixons! On which subject of political reactionaries/warrior types with Scottish names — George McLellan, Douglas MacArthur, Stanley McChrystal, John McCain — see this post: Obama’s McMoment? McMaybe.)

Maybe that culture is transmitted…culturally, but reading Fraser’s fiction and nonfiction on the Scottish border wars, it’s not hard to understand how it could have emerged genetically through natural selection. The non-“pugnacious” clans simply didn’t survive; selection pressures were strong.

Or read Steven Pinker in The Better Angels of our Nature on the “culture of honor.” Here from  NYT review of the book:

Pinker argues that at least part of the reason for the regional differences in American homicide rates is that people in the South are less likely to accept the state’s monopoly on force. Instead, a tradition of self-help justice and a “culture of honor” sanctions retaliation when one is insulted or mistreated. Statistics bear this out — the higher homicide rate in the South is due to quarrels that turn lethal, not to more killings during armed robberies — and experiments show that even today Southerners respond more strongly to insults than Northerners.

Whatever the source, nature or nurture, patriotic pugnacity doesn’t seem to be making those Scots-Irish Appalachians very happy:

Maybe eventually Scots-Irish Appalachians will stop clinging to guns, religion, “honor,” revenge, and shallow, self-satisfying, supposedly “patriotic” pugnacity. Maybe they’ll accept the fact that they lost the Civil War a century and a half ago, that we’re not going to “take the country back” to that time. In other words, maybe they’ll join some semblance of the modern world. Now that would be a disaster for the Republican Party.

And arguably the single most effective long-term strategy Democrats could adopt would be somehow convincing Appalachian voters to vote their own (and everyone else’s) economic self-interests. Turn the corner on a dozen or so counties in Indiana, Virginia, and North Carolina (and Florida), and Republicans will be permanently relegated to the wilderness that they seem so hell-bent on occupying and (re)constructing.