This one is by CoRev. 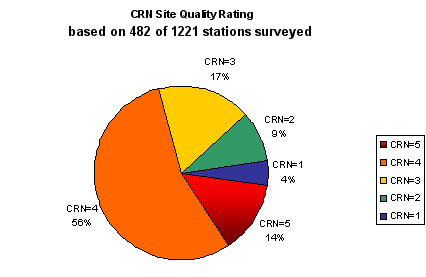 Wow is an understatement! Fully 87% of the US Historic Climatology Network (USHCN) can not maintain measurements consistently within 1 degree centigrade. That’s a real data quality issue. You can find the most recent survey results and their quality rankings at surface stations survey.

Tell me again how much the temperature has risen in the past century? Can we use data from these stations to show even a reliable historical record? Some questions? Sure! But not for the United Nations. The United Nations can make predictions, and tell us what will happen, with ranges and probabilities:

The Intergovernmental Panel on Climate Change (IPCC) said temperatures were probably going to increase by 1.8-4C (3.2-7.2F) by the end of the century.

So, if we are confirming model results from ground station measurements of dubious quality, then what can we say of the quality of the model results? Moreover, if over 56% of those ground stations are not consistent to within 5 degrees CENTIGRADE (9 degrees F), what can we expect from estimates using their data? How can we even adjust their readings for quality?

Why ask the last question? Because the group surveying the stations is a volunteer group. One formed after it was realized that those so important ground stations had not been surveyed for years, if ever. What is even more important is that in the first few station surveys findings showed some absolutely horrible locations, conditions and resultant readings.

The stations are monitored and reported by the National Climatic Data Center, National Oceanic and Atmospheric Administration. They have been their “Official” stations for over a century in many locations.

If you find it hard to believe that these stations could be in such poor locations/conditions, and no one ever questioned it, a sampling of the early findings of the survey can be found here. No matter your feelings and understanding of Anthropogenic Global Warming, it is REALLY REALLY hard to deny the findings from this volunteer group.

Sometimes a little skepticism can be helpful. I still don’t know the impact man has had on the global warming issue, but I do know that there are questions (in fact man questions) over the quality of the current findings. If the findings are questioned, should we not question the recommendations derived from them?

This one was by CoRev.

My response… we can throw out astronomy too because 150 years ago, astronomers, many of them amateurs, would make their observations from inside big cities like NY or London. Nowadays, light pollution makes that impossible. But you say – well, these days most telescopes are out in the middle of nowhere, and some are actually in orbit.

Turns out climatology works the same way. Satellites are able to spot big reductions in the ice over both the North Pole and the South Pole. And then there is the little matter of former ice floes becoming shipping lanes.

I’m not qualified to have an opinion on global warming. Perhaps the warming being observed is cyclical. Perhaps not. But it seems to me that insisting that everything that is observed is a fake because some of the measurements are poor while ignoring much better measurements that show the same thing makes no sense. Especially when it comes from folks who still tell you that lower taxes produce faster growth or that tax cuts raise revenues.