WalMart, the IRS, and Transfer Pricing 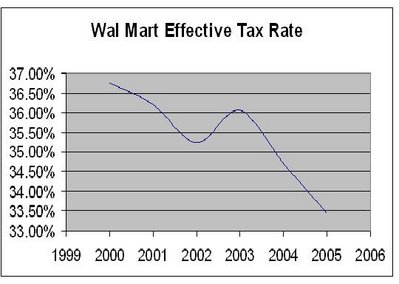 Cactus and Mark Thoma have emphasized the latest from David Cay Johnston:

Top officials at the Internal Revenue Service are pushing agents to prematurely close audits of big companies with agreements to have them pay only a fraction of the additional taxes that could be collected, according to dozens of I.R.S. employees who say that the policy is costing the government billions of dollars a year … With one exception, other working agents would talk about the issue only on condition they not be identified because they feared being fired. They said a policy intended to avoid delays in auditing corporations was being pushed so rigidly that it prevented them from pursuing numerous examples of questionable corporate tax deductions … auditors said they were told to limit questioning only to those specific issues that the I.R.S. and the companies had agreed in advance to examine. When other questionable deductions emerged in the course of the audit, they said, additional taxes were ignored. Rank-and-file auditors said that the sharp rise in tax dollars collected per hour of audit was not a sign of an improved auditing system but simply reflected the fact that abusive and illegal tax shelters had become so common that it was easy to find additional taxes due.

Mark directs us to this story:

Before Everson was appointed to head the IRS, the suggestion was that it was outgunned and outmanned. Now the suggestion is that the politicians have told those who were still trying to enforce the tax code to not bother when it comes to large multinational corporations. The last time that I went after the lack of enforcement of transfer pricing, I noted two things – the general drop in the effective tax rates for U.S. based corporations and the effective tax rates for a few life science companies. But maybe it’s not fair to blame Commissioner Everson for the latter as the life science companies have been playing this game for years. Plus – part of this game was section 936, which was President Carter’s misguided attempt to use tax loopholes in the hope that it would lead to faster development in Puerto Rico. Section 936 is gone and the IRS is going after some of the life science companies.

So I have decided to pick on a retail company – OK, a very large retail company whose effective tax rate has declined since 2003. But wait a second, how could transfer pricing be responsible for this dip in WalMart’s effective tax rate? It does not have manufacturing subsidiaries anywhere as it purchases goods from third parties to sell in mostly high tax jurisdictions such as China. So why would an IRS agent even think about tranfer pricing abuse? Of course, this question is not hard to answer if one reads Angrybear. But to be honest – my post was not exactly rocket science. So when will the IRS under Commissioner Everson go after this rather simple game? Or does the IRS even wish to do so?