Read My Lips: Much Higher Taxes 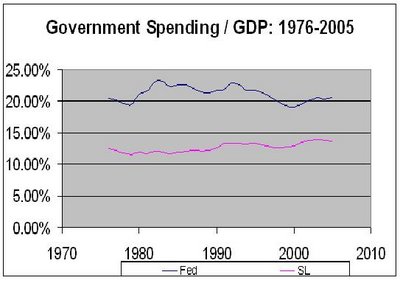 Mark Schmitt takes us back to the late 1970’s and Ronald Reagan’s 1980 campaign for the White House:

Thirty years ago, a small band of conservatives understood that what they called the era of “tax and spend” – in which government grew inexorably on a tide of invisible tax increases through Republican and Democratic administrations – was ready to be challenged. In 1977, Rep. Jack Kemp and Sen. Bill Roth introduced a bill to cut tax rates by a third and index them to inflation. They were radicals even within their party; this was the plan that George H. W. Bush called “voodoo economics.” A year later, California passed Proposition 13 capping property taxes, and Time magazine almost ran out of extreme metaphors – ”avalanche,” “earthquake,” “revolutionary” – to describe it. By 1981, a Proposition 13 supporter, Ronald Reagan, was president, and Kemp-Roth was the law. Everyone active in politics today – virtually every elected official, every speechwriter, every strategist and pollster – came of age in the 30-year era of tax revolt. It is so deep in our blood that it is surprising to be reminded that there was a time when you could raise taxes and not lose elections. For 30 years, we have seen what happens to people who try straight talk on taxes: “Mr. Reagan will raise taxes, and so will I. He won’t tell you. I just did.” Those were admirable words, but the Democratic nominee who spoke them in 1984, Walter Mondale, went on to lose 49 states and the presidency. The casual dishonesty of George H. W. Bush’s “Read my lips – no new taxes” was more politically successful in 1988, but when he inevitably broke the promise, he, too, lost the presidency. That’s a lesson his son – and every Democrat – has learned well.

But what about state&local spending? It was 12.4% of GDP in 1976. The share rose to 13.7% of GDP as of 2005. The Proposition 13 crowd told us that state governments spend frivolously but if one looks at these budgets – much of what state and local governments spend go to public education, transportation, and what the Bureau of Economic Analysis calls “public order and safety”. California’s current government is a Republican who wants more spending on education and transportation. I trust the Republican Party is not for reducing the size of our police forces. Now it is true that state and local governments have seen expenditures on health care rise, but this spending is currently around $50 billion per year.

Given the fact that government spending has not been decreased under this “tax revolt”, how are we paying for all this spending by these “big government conservatives”? Mark continues:

But the truth is that we are heading down a path toward fiscal crisis that will inevitably require a major increase in revenues. In case that sounds like a euphemism, I’ll say it plainly: Taxes must go up. If Democrats try to avoid that fact, they’ll become mired in trench warfare with Republicans over small-bore increases that will cost them political support and won’t really address the problem. But if Democrats seize the opportunity to define a new era of the politics of taxes, as Republicans did 30 years ago, they can shape the debate in a way that may actually help them to achieve some of their most-cherished policy goals. Everyone who looks at the numbers knows that taxes must go up. If we do nothing at all, the years 2007 through 2016 will bring deficits of $3.5 trillion outside of the surplus in Social Security. But doing nothing assumes that all the Bush tax cuts will be allowed to expire as scheduled in 2010 and subsequently. If the tax cuts are extended, and spending remains generally unchanged, the 10-year deficit will total $7.8 trillion. To balance the budget under these conditions would require cutting defense spending by 67 percent, Medicare by 54 percent, or every other program by a third, something that no one in politics has shown any willingness to do. The current path leads straight into a severe economic crisis.

President Reagan replaced Tax&Tax and Spend&Spend with Spend&Spend and Borrow&Borrow. But borrowing is only the deferral of taxation. The Republican Party is not interested in reducing defense spending, spending on police forces, or even spending on education and transportation. Since there is no interest in significantly reducing government purchases, the only proposals from conservatives that would materially reduce government spending come down to reducing government support for health care and the taking away of our Social Security retirement benefits even as the Federal government continues to impose payroll taxes. Yes, the backdoor employment tax increase is part of the Republican game plan as Barkley notes. Barkley invites us Angrybears to “Scream It From the Rooptops”. Well, it’s cold outside so I’m SCREAMING it from my living room.

Mark notes that some of the more honest conservatives are proposing tax increases on consumption and energy. Even then – they are talking about tilting the overall tax and transfer system from being slightly progressive to being regressive. The real political question therefore has never really about how large of a government we want. It’s simply about who will pay all of those deferred taxes. George W. Bush will tell you that no one has too. Of course, George W. Bush lies a lot.

Update: James Capretta tries to spin the paygo debate into something where it is George W. Bush who is driving us towards a balanced budget. And if you think Bill Clinton was a fiscally responsible President, Capretta says give all the credit to Newt:

The seeds of the coming budget conflict were planted in the Clinton era. After taking control of Congress in the 1994 election, Republicans constructed and passed a balanced budget plan with sizeable tax cuts.

Newt’s Republican Congress passed massive spending cuts? Where? The defense department’s budget perhaps but Newt is a big defense budget kind of guy. Nice try, James – but I can see why you had to turn to the National Review to get this spin published! Of course, the real Laugher comes with Capretta’s forecast as he thinks we can see double digit increases in tax revenues. Well maybe we can in nominal terms if the Bush fiscal policy ever leads to accelerating inflation.