Paying Down the Federal Debt with Smoke and Mirrors 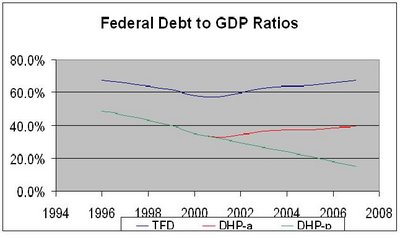 The President decided to write an WSJ oped that was incredibly dishonest on a host of topics but let’s stick to the economic issues – such as growth, employment, and our yes – paying down the Federal debt. Conservative Andrew Samwick mocks the Laffer curve claim that lower tax rates lead to more revenues, while liberal Mark Thoma goes after the general claim that the tax cuts were a cause for the alleged increased economic growth.

But wait a second here. Real GDP as of 2006QIII was only 16.34% higher than it was as of 2000QIII, which means the average annual growth rate has been a mere 2.55% over the past six years. Payroll employment in November 2006 exceeded payroll employment in November 2000 by only 3.692 million, which translates into 51,000 new jobs per month on average over the past six years. So when President Bush writes:

America’s priorities also include keeping our economy strong. The elections have not reversed the laws of economics. It is a fact that economies do best when you reward hard work by allowing people to keep more of what they have earned. And we have seen that businesses can expand and hire more workers when they have more money to invest – and since August 2003, America’s employers have added more than seven million new jobs. It is also a fact that our tax cuts have fueled robust economic growth and record revenues.

One has to wonder what he’s been smoking. First of all – the premise that one cannot reverse “laws of economics” is just stupid as economists do not write laws. OK, economists often tell their students about the “law of scarcity”, which is a basic principle of economics that these free lunch “supply-side” fools never understood. These supply-siders are touting the fact that growth during the last three years has exceeded the paltry growth of the prior three years. Whether one is a Keynesian or not – most economists recognize that aggregate demand driven deviations from full employment tend to reverse themselves. The investment led recession motivated the Federal Reserve to lower interest rates for a while.

Whether the Bush tax cuts and other forms of fiscal stimulus (yes, government purchases increased) helped or hurt the Federal Reserve efforts can be debated. The standard Keynesian view is that reducing national savings via fiscal stimulus increases aggregate demand, but the Bush approach to maximizing the long-term aspect of fiscal stimulus while screwing up the short-term aspect of fiscal policy may be one reason why the current recovery took so long and has been so anemic. After all, all schools of economics recognize that reducing national savings lowers investment by driving up interest rates. But you say interest rates have been low. But lately real interest rates have been drifting up as noted in another great discussion from Menzie Chinn.

The title of this post draws its inspiration as well as some of its evidence from my AB colleague cactus who reminds us of the 2001 Economic Blueprint where President Bush had the gall to suggest that under his fiscal policies would allow the Federal debt held by the public would decline from 35.1% as of 2000 to only 6.5%. Our graph shows the projection debt held by the public (DHP-p) versus what we have seen so far in terms of the actual debt held by the public (DHP-a). Did you notice that through 2007, actual debt as a percent of GDP has increased not declined? But you protest as the last two data points are the White House projections. What did cactus say?

But his goal of cutting the deficit in half – cutting an inflated projected deficit that never occurred, wasn’t the plan on which he ran for office back in 2000.

That’s right, the Economic Report of the President has lately included bogus high marks for the projected unified deficit so the Liar-in-Chief can claim we cut the unified deficit in half. But that’s not my main problem with the garbage accounting from the incredibly dishonest White House. Take a look at the total Federal debt (TFD) to GDP ratio. Its rate of increase – the General Fund deficit – has not decreased. That’s correct boys and girls, any decrease in the unified deficit is attributable to an increase in those Trust Fund surpluses. Never mind the Thief-in-Chief wishes to steal your retirement benefits.

Our graph starts in 1996 for a simple reason: the total Federal debt to GDP ratio rose from 32.6% in 1981 to 67.3% because we were stupid enough to listen to the free-lunch liars who advised President Reagan back in 1981. No, his tax cuts did not raise economic growth. Rather they reduced investment and long-term growth just like the Bush tax cuts have. The reversal of this fiscal insanity during the 1990’s did not lead to a 1993 recession as many Republicans predicted. No – the Clinton years were marked with strong economic growth and an eventual reversal of that mushrooming total Federal debt to GDP ratio. And regardless of how many lies President Bush packed into that WSJ op-ed, this ratio is expected to hit 67.5% by the end of 2007. And if fiscal policy is not changed – this ratio will continue to rise.