Kudlow Endorses War as a Boost to the Stock Market

Lawrence Kudlow explains the strength of the stock market this way:

Of course, there are a lot of factors driving these markets. Corporate profits are strong. Productivity is high. Inflation and interest rates are low. And the threat of recession is nil. All this is good for stocks. And markets do work. The high oil prices of the last couple of years have generated huge profits and considerably more production. Oil inventories are high and the world seems to be awash in oil supply. That (along with some unusually warm weather) is driving prices lower.

I could quibble with the Bush cheerleading and the claim that there is no chance of a recession, but the general spirit of this passage is about right. Economic fundamentals drive the stock market. So explain this jingoism:

Amidst all the pessimism about the U.S. strategy-shift in Iraq, world financial markets seem to be voting for Bush and his plan – not against … But President Bush’s overhauled Iraq strategy, including a tougher line on Iran, is being viewed by investors as a plus for security in the Middle East. Two large aircraft carrier groups and 16,000 sailors have been positioned in the Persian Gulf. There also are indications that the U.S. will provide Patriot anti-missile defense systems to allies in the region. So, putting all this together, geopolitical risk premiums are actually declining – hence lower oil prices.

Kudlow hasn’t thought this through. Suppose Iran calls the bluff and suppose the neocon nitwits that Kudlow hearts convince President Bush to declare war on Iran. Oil prices will not fall, they’ll increase substantially. And I seriously doubt that a full scale war in the Middle East will be good for the stock market.

Some four years ago, Kudlow was advocating that we invade Iraq. Back then, crude oil prices were hovering around $30 a barrel. Kudlow also predicted back then that U.S. aggression in the Middle East would lower oil prices – to around $12 a barrel. Using data from this source, I’ve provided a graph to see how well Kudlow’s forecast turned out. 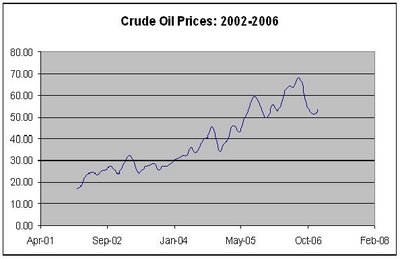