Kudlow and Bush on Those Rising Real Wages 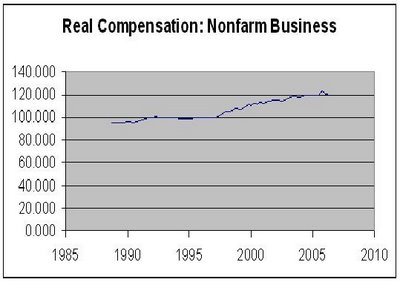 Lawrence Kudlow does more of his Bush cheerleading on the “economic state of the union”:

It seems that Kudlow may have assisted in this part of Bush’s upcoming speech tonight:

A future of hope and opportunity begins with a growing economy – and that is what we have. We are now in the 41st month of uninterrupted job growth – in a recovery that has created 7.2 million new jobs … so far. Unemployment is low, inflation is low, and wages are rising. This economy is on the move – and our job is to keep it that way, not with more government but with more enterprise.

Update: My apologies to our smart and honest readers but we have a new troll who is accusing yours truly of being dishonest for reporting the fact that real compensation over the past three years have not been increasing that quickly. You see, this Nitish keeps hammering that I should have reported on real wages excluding fringe benefits. I checked with the BLS series on real wages in 1982$. BLS reported as of December 2003 that real wages were $8.31 and as of December 2006 were $8.34. Yes, an increase of less than 0.4% over a three year period. I rest my case!