David Leonhardt created an interesting blog discussion by asking what else $300 million a day could purchase in terms of other forms of government spending. We could increase other forms of government spending by $100 billion a year, but even this member of the deficit hawk wing of the Democratic party (with all my talk of crowding-out aka the law of scarcity) had to be reminded by Menzie Chinn in Escalation and Accidental Military Keynesianism that I am a Keynesian at least in terms of business cycle analysis. Menzie provides other analyzes that show often much we are spending at least $100 billion a year on this military misstep.

But what’s interesting is that Menzie looks at the fiscal policy multipliers per a couple of large econometric models. Both seem to suggest that the short-term multiplier is near unity but the real GDP impact dissipates over time. All this makes sense to me as I kept pestering Menzie with crowding-out comments. But Brad Setser schools this Bear with

no need to worry about crowding out. China is set to finance the “surge” with a “surge” in its current account surplus … tho I guess some of that surge may be offset by a slide in the savings surplus in the oil exporters.

Perhaps for a war that began in the second quarter of 2003 when the GDP gap was rather large. But how large? Let me begin with a modified version of the Lawrence Kudlow Deficit Dance approach:

As a result, actual economic performance has fallen below the long-term 3.5% historical trend line, which reflects the economy’s indisputable potential to grow. If that trend line were extended through 2002, as though no slowdown had occurred, then the potential third-quarter gross domestic product would have been $9.829 trillion. Instead, actual GDP fell $364 billion short of the mark. Cumulatively, over the past two years, the loss of potential GDP comes to $1.95 trillion – a considerable amount.

I say modified version as Kudlow’s estimate of the gap (circa $2 trillion a year) confuses summing 6 quarters of annualized flows with the proper averaging of them. But I take the $9848 billion real GDP figure for 2000QII real GDP (all figures in 2000$) and assume a 3.5% annual growth rate – potential GDP would be $10,919 billion so the GDP gap would be $706 billion since reported real GDP for 2003QII was $10,213 billion. But this estimate might be too high as 2000QII real GDP may have been beyond full employment and there are reasons why full employment growth may have slowed (such as the anti-supply-side fiscal excesses of the Bush Administration). Besides – the assumption that the potential GDP grows by 3.5% per year leads to the conclusion that the gap is now $718. Some might argue that the average real GDP growth for the past six years, which has been around 2.5% per year is a reasonable estimate of the growth rate for potential GDP. Under this conservative assumption, the GAP was $392 billion. I prefer, however, to proxy potential GDP by assuming a 3% growth rate. By this measure, the GAP as of 2003QII was $548 billion, while the gap as of 2006QII was only $371 billion. Not exactly full employment in 2006 – but perhaps reasonable. But by any of these proxies, we had a large GDP gap when the Iraq War started. Of course, a student might ask “wasn’t the 2001 tax cut designed to offset the recession?” Good question, but I wonder answer – the aggregate demand benefits of this tax cut were less than the White House had predicted perhaps because their aggregate demand policies were poorly designed.

But what if exchange rates are not pegged and what if the Federal Reserve does not keep interest rates constant in the face of fiscal policy? On the former, I have tended to argue that fiscal stimulus would likely lead to dollar appreciation, which would crowd out net exports. The argument assumed that the fiscal stimulus would lead to higher interest rates. The Price-adjusted Broad Dollar Index had increased from around 100 in early 2000 to almost 113 during the first quarter of 2002, but this appreciation was short lived. By late 2003, the index had declined to 100 where it stayed through the third quarter of 2004. 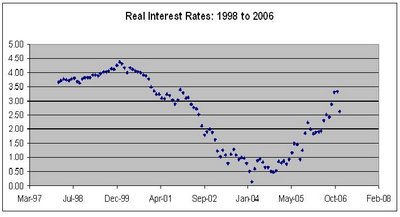