This post is by Angry Bear regular Divorced One Like Bush. I have to apologize to the reader and DolB since the post involves graphs and I haven’t gotten them looking quite right. Any screw-ups are mine. You may want to contact DolB directly for a better look at the graphs… his address is the letter d followed by the letter j followed by becker (all as one word) at cox dot net.)

First, I want to thank PGL and cactus for letting me present an idea at the Angry Bear. Second, let me say that I’m not an economist. I don’t even play one. Although I did have one course in college. The following is based on data from 360Data.org and the BEA.

The more I’ve been looking at trends since 1947 to 2005, I am thinking this issue of tax rates on income is missing the boat.

Up until around 1966, net dividends, consumption of fixed capital, fed income taxes, non residential investment and undistributed profits rise in parallel to the CPI.

After 1966, fed income taxes and consumption of fixed capital (depreciation) start rising faster and accelerates after 1981. In 1981/82 depreciation rises above income taxes and stays there until 1987. This is the first time it has happened. It does this again from 1990 to 1995/96 at which time taxes stay above and rise faster than the depreciation until 2000/01 when it falls to 97/98 levels. However, depreciation continues to rise.

Against the GDP, depreciation and taxes start to close the gap of slope in 1974. The GDP slope declines and the other two increase so that all 3 are at there closest in 2001. However, depreciation gets closest to GDP in 2005. All 3 are rising much faster than CPI.

Around 1975, undistributed profits and nonresidential investment start rising faster than CPI. Net Dividends parallels the CPI. In 79/80 dividends dives below CPI but investment continues to rise. By 87/88 dividends are rising over the CPI, and parallels the rise of taxes to 2005. Investment falls below CPI 91/93 then rises rapidly until a 2000 decline to below CPI in 2002 and rises to cross above in 03. Undistributed profits remains below CPI from 81 to 94. By 98 it is below CPI again, until it starts it’s rise in 01 to going almost vertical in 02.

So, what do I get from this? That this nation has changed it’s focus as to how to make this nation earn money. It changed it’s focus to capital and only capital and this change has been implemented in stages. The closing of the gap between GDP, Fed Income taxes and depreciation and pull away from the CPI, investment, dividends, and undistributed profit with the start of the biggest split being 1981 can only mean we changed our thinking. And it happened with the “Reagan revolution” tax changes. I have noted at this site that I believe the tax code changes in effect changed labor from an asset to a liability. It is part of the focus change to capital only.

We gave away revenue in the form of depreciation tax schedules as the first implementation of the focus. That the tax and depreciation alternate after 1981 and coincides with the tax bills can not be coincident. That we see a mix of activity in the investment, undistributed profits and dividends after this time that is not evident in the pre 81 period also shows that we have changed our focus. As mentioned, there is a continual, accelerated rise in dividends after 1987. This was the second part of the implementation. Now most recently, undistributed profit shows a major rise from 2002, quadrupling.

We have changed in this country, and it is not a change keeping with the premise of the writers of our constitution. At the same time, I believe the rich will find they have traded quick money for long term security.

I believe this change of thinking is why this country can no longer solve problems as in the past. We focus on the short term gain (as reflected in our tax policies) and not the long term resolution. Finally, if we are going to solve the tax rate issue, then we better start looking at not only personal rates, but the total relief of taxes on capital. 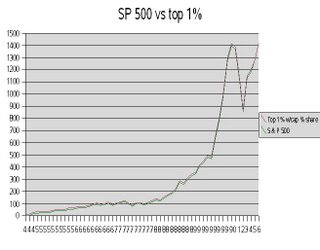 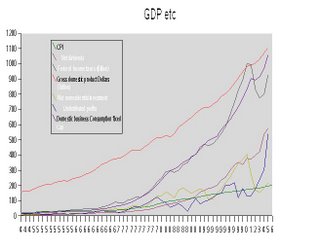 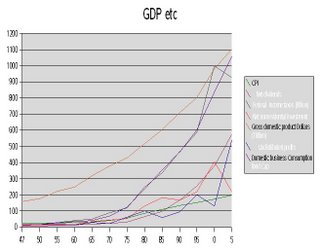