here are the effective federal tax rates for 2004 (the most recent year available in this report):

These numbers include all federal taxes (not just income taxes) and are expressed as a percentage of household income.

In case, you are wondering – this does include payroll taxes. Of course, it does not include state and local taxes.

Update: Permit me to expand on my comment in a couple of directions. The first is to note that in 2004, the ratio of state&local tax revenues to GDP was 13.6%, which compares to only 12% in 1979. If (and I don’t have any particular data on this), state&local taxation tends to be regressive, the reporting of Federal tax progressivity overstates overall tax progressivity.

But I think there is a more important point – that being that current Federal tax revenues are not covering Federal spending so there is a huge amount of deferred taxation. And of course, the Bush Administration is not about to tell us who will pay these deferred taxes as they are trying to claim no one will. To give some historical context, I’ve placed on a single graph, the effective tax rate for the upper quartile from 1979 to 2004 (blue line) as well as the ratio of Federal spending to GDP (pink line). The former has always dominated the latter at the Federal level, but notice that the effective tax rate for the upper quartile tends to be a lot lower under Republican Administrations than under Democratic Administrations. And yet, the ratio of Federal spending under Bush43 was approximately what it was under Jimmy Carter. 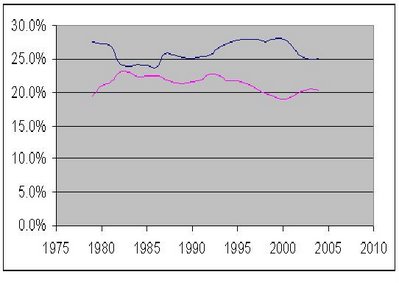 The moral is that since we don’t know who will pay for all of these deferred taxes, any calculation based on current tax revenues is misleading. Now if the deferred tax bills will be spread out in progressive manner, then Dr. Mankiw’s post might make some sense. But as far as I can tell – the only suggestions from Republicans as to how to pay off these deferred taxes seem to take the form of regressive taxes.