Employment Over the Past Six Years 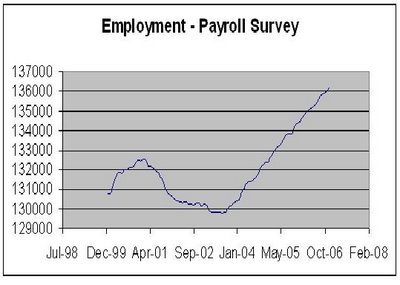 I’ve received a couple of emails and comments regarding President Bush’s claim that 7.2 million new jobs have been created under his watch. Since I couldn’t reach Jim Webb’s speechwriter this early in the morning, I’ve decided to graph the payroll survey from 2000 to 2006 and let the picture tell the story. Sure, employment in December 2006 was 6.4 million higher than it was in September 2003. However – when one compares employment as of December 2006 to employment as of December 2000, we see employment has grown by only 3.73 million. I guess his speechwriters thought 52,000 new jobs per month didn’t sound dramatic enough.

Update: AB reader Ken Melvin emailed me something that got me thinking in terms of the household survey rather than the payroll survey – and in particular, the employment to population ratio (EP). EP was 63.4% as of December 2006 and Ken’s thought process ran along these lines. Suppose we benchmark employment growth by considering where it would be if we had retained that 64.7% EP as of April 2000. BLS is reporting population to be 230.108 million as of December 2006 so the 1.3% difference in the current EP as compared to the April 2000 record represents almost 3 million lost jobs. OK, maybe it’s a stretch to suggest the natural rate of EP should be its record observation. But let’s suppose we assign a value to the natural rate of EP around 64% as I suggested a while back. We’d still be 1.4 million jobs short of this natural rate.