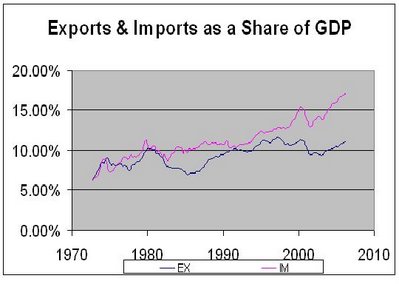 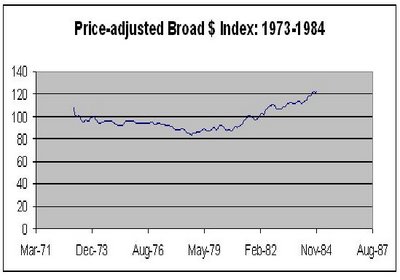 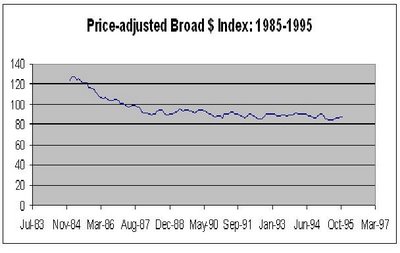 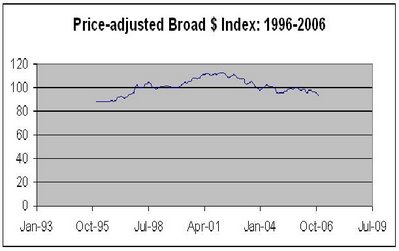 Yesterday’s WSJ Econoblog featured Menzie Chinn and Kash Mansori explaining the recent devaluation of the dollar, its longer term outlook, and the implications of the dollar devaluation. This discussion was on the afternoon that we learned that the current account for 2006Q3 was $225 billion (on a quarterly basis) or 6.8% of GDP. So why has the dollar been devaluing? Menzie opens by noting that it could be simply anticipation of lower U.S. interest rates (why I hope this continues will be explained later). While Menzie and Kash both note that abrupt changes in exchange rates might prove troubling, Kash rightfully noted that the large current account deficit might require a further devaluing of the dollar (why I hope he is right will be explained later – something along the lines of Kash’s real exchange rate puzzle). While Kash brings up the fact that U.S. national savings is very low relative to our investment, Menzie notes that the Chinese will not wish to see the yuan appreciate quickly.

While this was a very good discussion, I want to bring up the flurry of discussions last Friday in part due to what Ben Bernanke said about the yuan and about China’s high savings rate. Mark Thoma notes that Bernanke’s comment about an undervalued yuan being an “effective subsidy – but the fuss struck me as legalese as Bernanke’s point has been labeled before as Central Bank mercantilism. Menzie noted that we have seen a modest amount of yuan revaluation.

Greg Mankiw questioned Bernanke’s comments about the Chinese savings rate. Let me take this one step further by asking whether Bernanke was arguing that China should engage in aggregate demand stimulus, which would be an odd policy recommendation taken in isolation. But let’s take the converse of this by noting what Dean Baker wrote about U.S. aggregate demand policy:

It includes without comment the statement that China wants the U.S. to increase its savings rate as a way to reduce its trade deficit with China. Well, a higher savings rate will only reduce the trade deficit if it leads to a recession or at least substantially slower growth. This one is pretty simple. U.S. demand for imports from China depends on the value of the dollar and the level of demand in the U.S. economy. A higher savings rate can reduce demand in the U.S. economy, but the idea that China would suggest the U.S. should reduce its trade deficit by having a recession is rather peculiar.

I tend to see this a little differently for reasons well expressed by Kash:

Obviously, exchange rates and domestic consumption/savings behavior are both jointly and simultaneously determined. But if I had to pick one to be more exogenous, I would vote for savings behavior. I think that the US’s underlying savings/investment balance has a lot more influence over the dollar exchange rate than the other way around. Dean suggests the opposite, and specifically argues that because the weak yuan has entailed the Chinese central bank buying lots of dollars, the Chinese exchange rate policy has effectively kept interest rates low in the US, which in turn has depressed savings.

Steven Kyle captures what Jan Tinbergen was getting at in his 1956 Economic Policy: Principles and Design:

In my opinion, both are. It is hard to imagine a “post-adjustment” world where there is not both a higher yuan and a US where there are lower deficits (i.e. more saving, probably on the part of both the government and the private sector). The reason for this is explained in my previous post but boils down to the standard result that if you have two targets (internal and external balance) then you need at least two policies to get there (in this case the exchange rate and the spending/income balance).

Steven, Kash, and I are all saying we need both an increase in national savings and some form of expenditure-switching expansion. Perhaps Bernanke was advocating a fall in Chinese national savings as part of a package where it would allow for some form of expenditure-switching contraction (preferably currency realignment and not U.S. trade protection). But this is all being played out in terms of the Bretton Woods II model of exogenous exchange rates. I would like us to consider how this pays out in a world of endogenous exchange rates with two policy instruments: fiscal policy and monetary policy. Below we have two types of graphs – the first graph shows both exports and imports as share of GDP. The next three graphs (sorry – my Excel chart function balks at graphing 34 years of monthly data) show a measure of the real exchange rate from 1973 to 2006, which should facilitate our discussion.
From 1973 to 1980, we facilitated between trade surpluses and trade deficits as the real exchange (1973 = 100) devalued to an index equal to 83.35 by October 1978. Some of this devaluation can be attributed to abandoning Bretton Woods during a period where the dollar was likely overvalued. I would also argue that President Carter’s fiscal restraint combined with the pre-Volcker monetary ease contributed to this real devaluation, which helped boost net exports. The end of Carter’s term, however, saw a run-up in inflation followed by Volcker’s experiments with tight monetary policy. I say experiments as his second dose of tight money came a reaction (or overreaction) to Reagan’s unfortunate fiscal stimulus in 1981. The real exchange rate shot up to 127.6 by March 1985, which lowered net exports creating a large current account deficit. Much of the problem came in the form of a falling export share but the subsequent dollar devaluation of the late 1980’s allowed exports to almost catch up with imports. By July 1995, the real exchange rate had declined to around 84.3.

The late 1990’s saw an investment boom and given the fact that our national savings rate barely increased despite Clinton’s fiscal restraint, the trade deficit rose in part because of a strong economy but also in part because of real exchange rate appreciation. When the investment boom reversed itself in 2001, the Bush Administration seemed hell bent on fiscal stimulus, which lowered national savings. So the real exchange rate appreciation continued through February 2002 when this index reached 113.2. Fortunately, the easy monetary policies that followed the 2001 recession led to some real exchange rate depreciation.

But I would argue we should hope for more real exchange rate depreciation to further boost exports and perhaps curb our appetite for imports. Now I agree with Dean Baker that fiscal restraint alone would likely lead to a recession, which is why I would prefer that the Bernanke FED be allowed to pursue the same deal with the fiscal authorities that Greenspan and Clinton made in 1993 – easy money with fiscal restraint. This would allow the lower U.S. interest rates that Menzie mentioned and a continued dollar devaluation thereby raising net exports. Alas, the hands of the Bernanke FED are tied by an insane fiscal stimulus much as the Volcker FED had to endure Reagan’s fiscal stimulus.