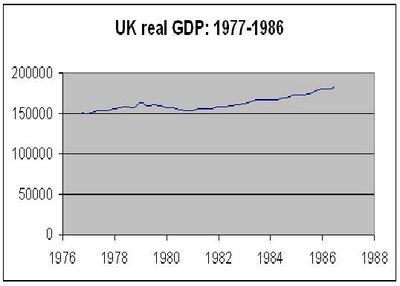 The National Review had Iain Murray write their tribute to the late Milton Friedman. I’m not sure why as Mr. Murray starts by saying he never met Milton Friedman. And then Murray goes on to blame the Thatcher (who became prime minister in 1979) recession (illustrated in our graph) on Dr. Friedman:

The broadcast was about monetarism; more specifically, Friedman’s central insight that the Keynesian notion that there was a trade-off between inflation and unemployment was simply wrong. Instead, it was monetary policy that drove inflation; too much money chasing too few goods led to higher prices. Inflation, in turn, destroyed jobs. Following the election of Margaret Thatcher as leader of the Conservative party, she and her allies such as Sir Keith Joseph realized that a healthy dose of Friedmanite policy had to be administered to the ailing economy. In 1979, the pre-election document “The Right Approach to the Economy” declared that a Conservative government would stop messing about trying to control the economy, strictly control the money supply, and institute supply-side reforms such as reduction of government spending and lower taxation. Of course, things didn’t work out quite as easily as that.

Even though Mr. Murray rambles on incoherently after this last quoted statement, that things didn’t work out quite as easily as that – but neither Milton Friedman nor Edmund Phelps said disinflation was painless. That claim was being made by their rational expectations successors (Robert Lucas, Thomas Sargent, etc.) who were the guides to the Thatcher and Volcker attempts to reduce inflation quickly through tight monetary policy. And the U.S. experiment worked no better than the UK experiment.

Now I thought the folks over at the National Review actually like Uncle Miltie – so why was their tribute to him blaming Thatcher’s follies on his advice to Richard Nixon in 1969 (which of course didn’t work painlessly either).