The Republicans Have Already Raised Your Taxes 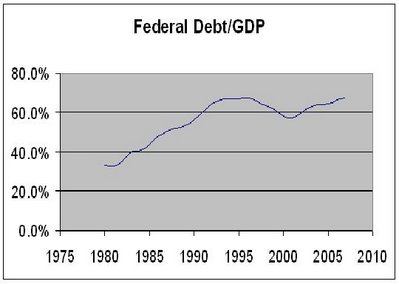 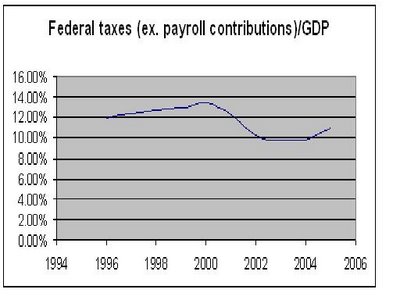 Cheney said that even with pollsters predicting that Democrats would likely make gains in both houses of Congress Tuesday, voter sentiment would not influence Bush’s Iraq policy. “It may not be popular with the public – it doesn’t matter in the sense that we have to continue the mission and do what we think is right. And that’s exactly what we’re doing,” Cheney said. “We’re not running for office. We’re doing what we think is right.”

Why would the Vice President tell voters to f*** you as to Iraq? I think the real message was clear when Cheney accused Charles Rangel of wanting to raise your taxes. Bill Frist said the same thing on Face the Nation and President Bush decided to a television version of his Saturday radio address to say the same thing:

President Bush devoted his last national radio address before critical elections to the economy, telling voters that a Democrat Congress would hit their pocketbooks.” Democrats are still determined to raise taxes,” Bush said from a coffee shop in Englewood, Colorado, in an unusual televised version of his weekly speech. He predicted Democrats would block renewal of expiring tax legislation if they regained control of Congress.

In other words, the GOP wants to change the subject and tell you that only they will keep your taxes low permanently. But as long as you accept the Milton Friedman realism that To Spend is to Tax, one knows that someone will pay more in taxes in the future as the GOP has no clue where to reduce spending. If you don’t believe Dr. Friedman, let me suggest you listen to Max Sawicky’s dog.

Let’s review a couple of time series. The first is the total Federal debt to GDP ratio from 1980 through what is projected for 2007. Notice three things. Debt rose relative to GDP after the Reagan tax “cuts” as the GOP never got around to reducing Federal spending. Under Bill Clinton, we temporarily reversed this increase through a combination of tax increases and reductions in defense spending. But George W. Bush changed all of that and the debt to GDP ratio is rising again. Simply put – we have deferred taxation but not reduced it.

After Cheney’s babbling about the “T” word, George Stephanopoulos interviewed Howard Dean who raised the “D” word – those massive General Fund deficits. Dean accused Bush and Cheney of “cooking the books” – something the former CEO of Halliburton is quite familiar with.

Our second graph gives you some idea of what Mr. Dean is talking about. Federal taxes excluding payroll contributions as a share of GDP are only 11%. Federal spending excluding Social Security benefits and interest payments are running around 14% of GDP. So the General Fund has an operating loss near 3% of GDP and on top of that, interest payments on the Federal debt are running another 3% of GDP. The GOP’s only idea as to how to reduce this shortfall is to cut the pork and waste that they have brought to Washington, D.C. over the past six years. Even if they did, it’s pennies on the dollar. Our graphs don’t include the massive and unfunded cost of the prescription drug benefit that the GOP is now bragging about. And when Democrats suggest ways to trim the cuts of this unfunded program, the GOP objects as it might hurt Big Pharma. See the latest from Dean Baker for more on the excuses from the GOP and Big Pharma.

So where will the spending cuts come from? I have argued many times that the real Bush-Cheney plan is a backdoor employment tax increase:

Bush’s Social Security proposal cuts the benefits of young workers drastically but does not reduce the payroll tax rate. In other words, it is a backdoor tax increase on young workers. The Bush fiscal agenda does appear to be tax cuts for rich older people paid for by deferred employment tax increases on young workers.

So here’s the real deal. Someone will face a future tax increase. To paraphrase Walter Mondale’s courageous statement to the 1984 Democratic National Convention – Dick Cheney “will raise your taxes; so will I. He won’t tell you; I just did”. The Republican’s secret plan is to impose massive tax increases on workers. Congressman Rangel would rather have some of the future tax increase placed on high income individuals. There in is the real choice facing voters. So get out and vote tomorrow.

Update: I was wondering who at the National Review would be asked to spin that canard that Charlie Rangel wanted to raise your taxes – and the duty seems to have gone to Deroy Murdock:

If Democrats take Congress tomorrow, hide your wallet. Tax hikes and spending increases are right around the corner.

While he leads with the claim that the Democrats want even more spending than we have seen under the GOP led Federal government, Murdock provides not a single example of where they would propose more spending and not a single example where George W. Bush wants to cut spending if only the Democrats would let him beyond some weird tally from the National Taxpayers Union regarding proposals made in the Senate. Maybe Murdock is confused as to which chamber Charlie Rangel and Nancy Pelosi serve in. Murdock does admit the following:

I guess Murdock outsourced the hit job on Senator Kerry as allegedly a big spending to Jerry Bowyer who took the following quote to suggest that John Kerry is another Hugo Chavez:

Bowyer then goes onto lecture us as to What Would Jesus Do, which seems to be to give the wealthy a tax cut according to the Biblical scholar named Jerry Bowyer. But what is really incredible is that Mr. Bowyer seems to think that George W. Bush has reduced the amount that the Federal government is spending on health care. I guess he is incapable of comprehending the possibility that we can could have a more efficient health care system as he is unaware that the GOP is opposing Democratic proposals to lower the cost of that prescription drug benefit.