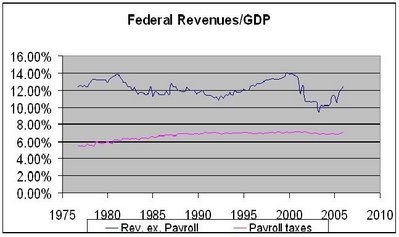 Today, voters will decide whether we will have a real Congress or a continuation of George W. Bush’s rubber stamp.As a follow-up to The Republicans Have Already Raised Your Taxes, I want to go back to this post with a hat tip to an old post from Kevin Drum. As I noted:

That’s right – on the eve of the Bush v. Gore election in 2000, Art Laffer and Stephen Moore lied to us. OK, that’s not unusual for these two. But let’s review the history of Federal revenue collections over the past 30 years (about the time some of us 50 plus somethings were in graduate school or entering the workforce). Under Jimmy Carter, we paid less than 6% of GDP in the form of payroll taxes with other forms of Federal taxes running between 13% and 14% of GDP. While the Federal debt to GDP ratio declined to less than 33% of GDP by the time Carter left office, we were not setting aside Social Security Trust Fund reserves so as to fund (or pre-fund) the retirement benefits of the baby boom generation.

So OK, we are now paying 7% of GDP in the form of payroll taxes so as to pre-fund the retirement benefits of the baby boom generation. Thank you St. Ronald Reagan for the 1983 Social Security reforms! Of course, you might have noticed that other forms of Federal taxes fell as a percent of GDP. And even though they will tell you otherwise, Art Laffer and Stephen Moore know all too well that there was no supply-side miracle during the 1980’s.

During the 1990’s, we saw tax rate increases to pay off the Reagan General Fund fiasco. Of course, Art Laffer and Stephen Moore predicted slow economic growth during the 1990’s. As usual, they were wrong. But then comes George W. Bush with his desire to “give us our money” back even as he increases government spending. Did that lead to a supply-side miracle? Of course not. But once again, the total Federal debt is rising relative to GDP.

A few of our friends on the right might prefer to report the unified deficit and the ratio of debt held by the public to GDP, which makes the picture look not quite so bad. But then aren’t they saying that St. Reagan’s 1983 promise has been destroyed? In other words, what we thought a generation ago were contributions to our Social Security retirement benefits were just increases in employment taxes so folks like President Reagan and George W. Bush can give tax breaks for the well to do. If so – couldn’t we have at least one Republican who would have the integrity to just say so.

Which brings me back to Kevin Drum who blasted Michael Kinsley for this:

Honesty is not just therapeutic. Fiscal honesty is a practical necessity. “New Direction” quite rightly denounces the staggering fiscal irresponsibility of Republican leaders and duly promises “Pay As You Go” spending. But in the entire document there is not one explicit revenue-raiser to balance the many specific and enormous new spending programs and tax credits.

In principle, Kinsley is right. But I’m with Kevin on this one as it is high time we hold the GOP to the standards of fiscal honesty as well.

Update Kate O’Beirne reports on a survey of likely voters:

What do I draw from this? That these likely voters have stopped reading the garbage in that rag Kate writes for – and actually have starting thinking logically about these issues. Why should any rational people trust the free lunch crowd in the GOP?