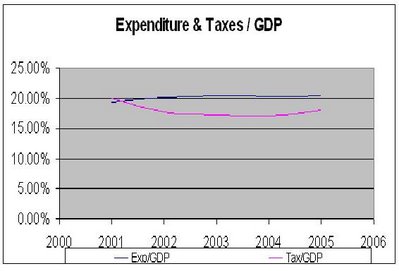 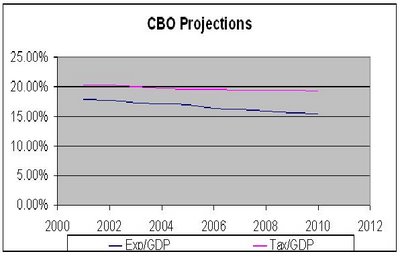 Mark Thoma picks up on where we left off regarding the latest excuse making for Bush’s budget fiasco from James Edward Carter. But Mark goes further in questioning some spin from Greg Mankiw. Greg writes:

The tax cuts amounted to $1.8 trillion of the $8.5 trillion – about a fifth. [Update: As several commenters point out, the added debt service is partly attributable to the tax cuts. The simplest correction would be to focus on the primary deficit by taking out the change in debt service. In this case, the budget swing is 7.2 trillion, of which the tax cuts represent a quarter.] Even that amount is an overestimate, because it most likely relies on static assumptions. A dynamic analysis that allows for a feedback of lower taxes to more rapid growth would reduce the share of the budget swing attributed to tax cuts.

I guess it is inevitable in the aftermath of “big government conservative” George W. Bush that true fiscal conservatives would wish to blame these deficits on spending increases, but check out our first graph and tell me how anyone could think that it was a spending explosion and not a reduction in taxes as a share of GDP that was mainly responsible for the return to large deficits. Now, I’ll admit that we could have lower taxes if we found some way to reduce government spending. But conservatives should admit that President Reagan did not accomplish this during the 1980’s and that George W. Bush never even tried.

So how did Mr. Carter come up with his spin statistics that Greg Mankiw fell for? Well, let’s go back to the January 2001 CBO document and look at projected Federal spending as a share of GDP, which assumed that it would fall to 15.4% by 2010. I have no idea why the CBO was projecting such a massive reduction in spending as a share of GDP – but that’s the reason Mr. Carter and Dr. Mankiw would make their claims.

I have another problem with the Carter-Mankiw spin. First, they tell us that it was weak real GDP growth that is partially responsible for weaker than expected revenues at the same time that they peddle the supply-side argument. The CBO, however, projected 2.5% real GDP growth (not exactly a supply-side miracle) and that’s what we have seen since 2001. So where is this alleged supply-side effect? And why is Greg Mankiw trying to deny that lower national savings will crowd-out investment?

In all fairness – I also have a problem with the Democratic spin that Clinton left George W. Bush with some massive surplus. Not only does this spin rely on the unrealistic projection that Federal government spending would fall to 15.4% of GDP by 2010, it also counts those Trust Fund surpluses. The General Fund situation really wasn’t that rosy in early 2001, and our pretending that it was may have been one reason why the voters trust George W. Bush phony promises back then.