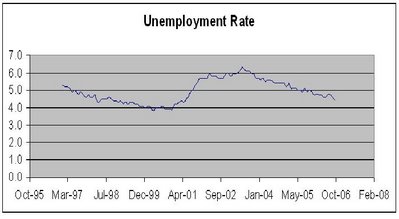 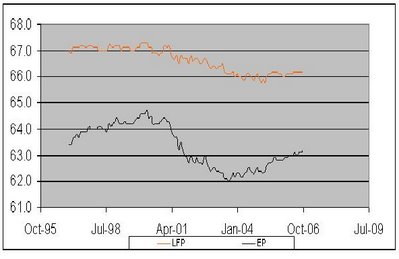 The Bureau of Labor Statistics announced employment gains for October 2006, which will be their last report before Election Day. The GOP has been trying to telling us that this is the best economy ever whether measured by real GDP growth or by employment growth. Now, it may be true that real GDP growth had been rather decent from mid-2003 to mid-2006 but if one takes a six-year perspective rather than a three-year perspective, real GDP growth averaged less than 2.5% per year. In other words, the recession was followed by a weak recovery. But the GOP spinmeisters kept focusing on the short-run, which is why that announcement that real GDP growth had slowed to around 1.6% had to be a kick in the teeth for them.

But what about the household survey? What about the unemployment rate? Well, let’s take a look at the employment-population ratio (EP) and the labor force participation (LFP) rate since 1997 with the unemployment rate (UN) being one minus EP/LFP. While EP equaled or exceeded 64% from late 1997 to April 2001, it declined to 62% by September 2003. For all the talk about recovery, EP reached was between 63% to 63.1% from March 2006 to September 2006. But, it turns out that reported EP increased to 63.2% as reported employment per the household survey increased by 437,000.

The GOP has been crowing about how unemployment has declined from its 6.3% rate in June 2003 to 4.6% as of September 2003. And the headline for the GOP talking points will be that the unemployment rate in October was 4.4%. Of course, this rate is higher than the 4% unemployment rate that George W. Bush inherited and some of the recent decline is attributable to a fall in the labor force participation rate. Odd – I thought those supply-side tax cuts was supposed to encourage a greater labor supply.

Update: As k harris points out, the revised payroll employment figures for the third quarter of 2006 show an increase of 501,000 not 362,000. To be honest, I had created much of my post last night hoping to be one of the first to post on this. But as I was sipping my first cup of coffee waking for my computer to boot up at 6AM on the west coast, our friend CalculatedRisk had already put up his post. And yes, he is just a few miles south of me.