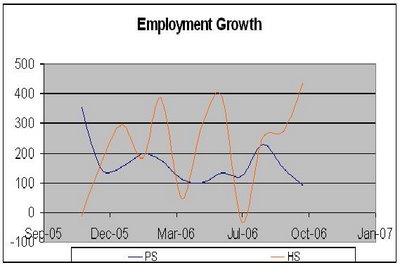 Dean Baker and the Wall Street Journal note that the reported growth in employment per the Household Survey (HS) was much higher than the reported growth per the Payroll Survey for the month of October. Given the tendency for HS growth to be quite volatile, I was wondering whether this one month difference disappears if we look at a longer period of time. My graph shows month by month growth for the past year – and it does turn that the HS shows a lot of volatility. However, the growth over the past year per PS was only 1,967,000 as compared to 2,662,000 per HS – for a difference near 700 thousand.

I looked at the data more closely and must come down on the side of the establishment survey. The simple arithmetic looks like this. Social Security tax collections were up 5.35 percent in fiscal year 06 compared to fiscal year 05. The average weekly wage rose by 3.9 percent, which implies job growth of 1.4 percent. Reported job growth in the establishment survey matches this closely, at 1.44 percent. However, we know that the Labor Department will add in 810,000 jobs to its March 2006 number in its benchmarked revision (these additional jobs are wedged in over the prior 12 months). When the data is adjusted for these additional jobs, the establishment survey shows job growth of 1.9 percent for the fiscal year, substantially more rapid growth than is implied by the growth in Social Security tax receipts. There are complicating factors here – self-employed workers pay SS taxes, but are not counted in the establishment data, many government workers don’t pay into SS – but these are not likely to change the basic story. It is implausible that the establishment survey is understating job growth, and it may well be overstating it.

But let’s say for a moment that the Household Survey is more accurately capturing employment growth. The reported growth has been strong enough to raise the employment-population rate so the unemployment rate has declined even as the labor force participation rate has inched up. So perhaps we are getting closer to full employment even if we are not there yet.

A Footnote on Footnotes: AB readers will likely ask whether I checked about the following footnote given some of my posts on those who fail to do so:

Consider the fact that reported employment was 136.4 million in December 2002 but appeared to jump to 137.4 million in January 2003. Did the employment to population ratio jump accordingly? Let’s see, it was 62.4% in December 2002 and 62.5% the next month. So very little of this increase can be attributed to anything other than some fluke coming from “changes in population controls”.