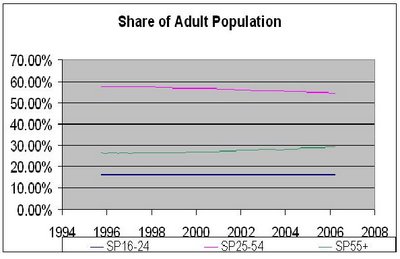 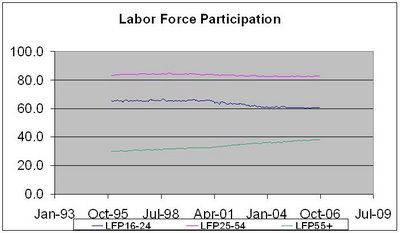 Maybe we should revisit the post from Mark Thoma entitled What Level of Job Creation will Sustain Full Employment? where Mark noted:

In addition, participation rates for workers over age 55 have been steadily increasing over the last ten to fifteen years offsetting some of the changes due to the changing demographic composition of the labor force toward older workers.

Mark also reminds us of a related paper from the Dallas FED on the decline in the labor force participation rate:

When the Federal Reserve argues that we should simply expect a lower employment to population rate than was observed in 2000 as natural, they are focusing on the fact that the share of the adult population that is in the 55 plus age group has increased. See our first graph. The Dallas FED also picks up on another point, which is illustrated in our second graph:

Another striking change in Chart 2 is the upturn in market participation among the 55 and over group. The increase followed almost a decade of flat participation rates among this group. What caused it? Research suggests that the rise in the labor force participation rate of older workers is due to a combination of factors. These include longer-term changes such as healthier and longer life spans, the decline in defined-benefit pension plans, changes to Social Security benefit rules, and the increased cost of health care.

Higher cost of health care and a reduction in expected future defined benefits for retirement – is this what the Bush Administration is really up to? Getting us old folks to work more by taking our Social Security benefits and handing them over to their base in the form of tax cuts for the rich and pork barrel spending?

Perhaps the aging of the population will eventually mean the natural rate of the employment to population ratio will decline over time, but the decline in the labor force participation rate seems to be from a decline for the kids as well as the 25 to 54 group. But then we were told that Bush’s tax cuts would induce greater labor supply.