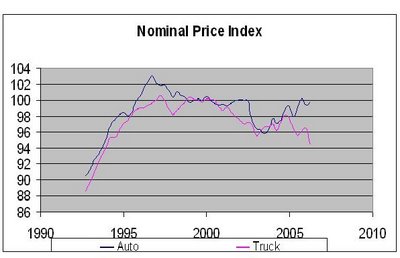 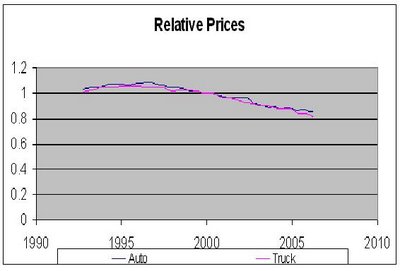 There has been a lot of blogging about that increase in motor vehicle production including some thoughts from Kevin Drum, which begins with:

Did GDP increase 1.6% last quarter? Only if you believe that auto production increased 26%, the estimate used by the BEA in its calculation of 3rd quarter GDP.

As we discussed yesterday, the increase in final sales of motor vehicles to domestic purchases was less dramatic as one of the contributors to this reported increase was a rise in exports and a fall in imports. While folks might be surprised given the troubles of the Big Three, Kash reminds us that other companies (e.g., Toyota) have production facilities in the U.S.

So maybe we are buying more Toyotas from the local Toyota plants or we are exporting a few more home grown Toyotas abroad. Not good news for Detroit perhaps, but these are the National Income Product Accounts – not the accounts for Ford and GM.

Kevin is also pointing to an apparent difference in what the Federal Reserve is reporting v. what BEA is reporting and wondering about price indices. I have graphed the nominal price indices for both automobiles and for trucks. Both rose generally rose from 1993 to 2000 with truck prices generally declining since then. In inflation-adjusted terms, the relative prices of both autos and trucks have declined over the past several years according to BEA data.