Ramesh Ponnuru and Brian Riedl don’t quite appreciate how Reihan Salam nailed part of what I said with this:

Inflation does not explain 6.6% annual growth

But maybe he should re-read:

Looking at nominal increases is the kind of stupidity we have come to expect from National Review nitwits like Lawrence Kudlow.

Brian – pull out inflation and what you seem to be getting is that real spending (or your subset of real Federal spending) is growing at about the rate that real GDP growth has been rising, that is, the Douthat-Salam claim that the spending/GDP ratio has barely budged. 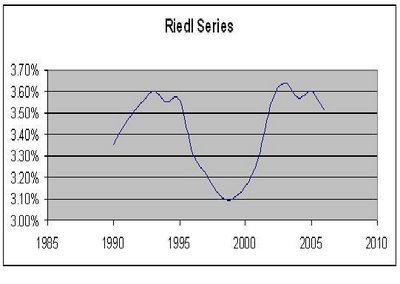 But let’s be fair, Brian did provide a definition of “non-defense, non-homeland discretionary spending” (speaking of subsets) and gave us this series relative to GDP from 1990 to 2006, which I’ve taken the liberty of graphing. Brian says this spiked under George W. Bush but it looks like it dipped under Bill Clinton. But let’s say we could reduce his category of spending from the 3.5% for 2006 to the lowest level in this graph – the 3.1% in 1999. The reduction in Federal spending would be about 0.4% of GDP or $50 billion if Brian got his wish list.

As CalculatedRisk would tell you, this means the General Fund deficit would still be $525 billion (or more). I still say that Ponnuru and Riedl should realize that this means that George W. Bush has imposed some massive deferred tax liabilities upon us.