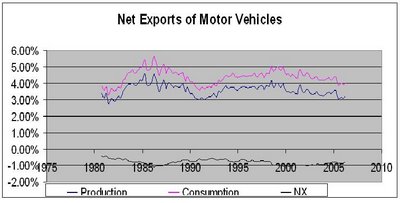 Tim Duy examines the controversy around the BEA advanced report for 2006QIII with respect to U.S. motor vehicle production with this illuminating follow-up:

Let’s disregard the price decline, and just switch to physical units. In the comments, spencer points out that auto and light truck sales rose from 16.17 to 16.63 million units in Q3. Did in fact those sales never really happen because the Big 3 cut domestic production? No – at least two channels can be operating. One, as Brad (and spencer) points out, is inventory depletion. Which gets to the point that although something may get counted as final sales in 3Q, that doesn’t mean it was actually produced in 3Q. It could have been counted as an inventory accumulation in a previous quarter, and is subtracted in the current quarter. If the BEA underestimated inventory draw for this quarter, they can fix it on a revision – nothing nefarious need be occurring. Moreover, just because a car is counted as a final sale in the US in 3Q does not mean it was PRODUCED in the US at all, in any quarter. In this case, the value is subtracted from GDP in the imports category. Note the large negative contribution due to rising imports

If we turn to the NIPA tables from BEA and go down to tables 7.24 through 7.26, we do see a reduction in the price index for motor vehicles as well as the fact that the reported nominal value of production did rise less slowly than the report real value. Final sales of domestic product also rose by more than motor vehicle output, that is, inventories did decline. But as far as net exports of motor vehicles, they declined during this quarter. But that only partially (and perhaps temporarily) reverses a long-term trend.

Kash got me thinking about the long-term as well as international trade as he traced the increase in real motor vehicle output since 1995 noting that some of this production may have come from U.S. based plants of companies such as Toyota.

I decided to plot final sales of domestic product (“production” abstracting from inventory swings) as well as the consumption of motor vehicles in the U.S. with the difference defined as net exports (NX) – all relative to GDP. My plot goes back to 1981 when net imports (net exports with the sign swithced) were less than 0.5% of GDP. Notice two things. Production and consumption both tend to be cyclical and the long-run tendency has been for net imports to rise as a share of GDP to around 1% recently. If we compare early 2001 to early 2000, we that consumption was higher at the tail end of the 1990’s boom than it was when President Reagan took the reigns from President Carter. Yet, production was about the same. During the last several years, both production and consumption have declined as a share of GDP, which is what one would expect if aggregate demand declined.

The bottom line is that while we are consuming as much as we were back in 1981 as far as motor vehicles as a share of GDP, we are purchasing more of those vehicles from abroad. So not only – as Kash suggests – has Ford & GM lost market share to the like of Toyota, even with Toyota opening plants in the U.S. we are producing less motor vehicles here as a percent of GDP than we were 25 years ago.