Real Compensation – Still Below Where It Was Two Years Ago 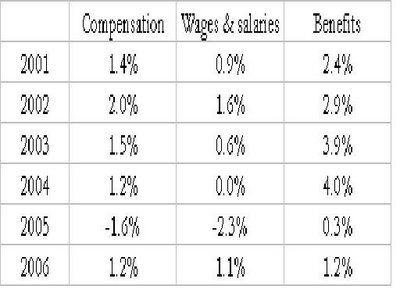 Kash treats us to three things: (1) the latest on compensation from the BLS; (2) his own analysis and chart; and (3) a discussion from Rex Nuttig:

In the past year, employment costs are up 3.3%, the fastest year-over-gain in five quarters. It’s the first time compensation costs have risen faster than inflation in two years … A year ago, inflation-adjusted wages were down 2.3% year-over-year, but were up 1.1% in the past four quarters … Even though employment costs are at a two-year high, the increase has been modest by historic standards.

OK, the latter may have been a trick or perhaps that rock Charlie Brown usually got during Halloween. So he starts off with a nominal increase before he notes that the real wage increase for the past year was less than the real wage decrease for the year before. Translation: over the past two years, real wages have fallen by about 1.2%.