Phillips Curve, Output Gaps, and the Effectiveness of Those Tax Cuts 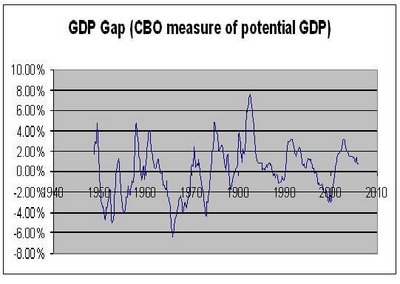 The 1967 Economica paper by Edmunds Phelps entitled “Phillips Curves, Expectations of Inflation and Optimal Employment over Time” has certainly attracted a lot of recent attention even if some of those praising Phelps have no clue what this paper said. I have to confess, however, that I’ve never been convinced that the Friedman-Phelps market clearing model that attributes business cycles to differences between actual v. expected inflation can explain why movements away from full employment display such persistence. My graph takes the measure of potential GDP used by the Congressional Budget Office and plot the implied GDP gap over time.

A simple regression of the GAP over its previous quarter’s value suggests that 92.7% of any deviation will be present three months later. If we extrapolate over four year, 30% of the deviation would persist. If agents formed rational expectations, why is there any persistence? Oh yes – that question was posed over 30 years ago by other market clearing types. Let’s just say I never bought into this particular market clearing assumption.

It would seem certain pseudo economists pretend they are supply-siders but are implicitly (ab)using Keynesian aggregate demand economics to justify Bush’s fiscal irresponsibility. But have the Bush tax cuts (2001 and 2003) really led to a faster than normal recovery – or the liberal critics who claim this recovery has been painfully slow correct? Well that depends on one’s dating. The pseudo-economists want us to ignore the 2001 tax cut as well as the monetary expansion that also began in 2001. They want us to start with the GDP gap in early 2003, which was around 3.2% if we use this CBO series (personally, I think the CBO is actually understating potential GDP but I haven’t devised my alternative series). With 13 quarters passing, my simple equation suggests that about 37% of the gap should persist, which would predict a gap equal to 1.2%. But the gap as of 2006QII was only 0.9%. Wow – those 2003 tax cuts did seem to help if one accepts this dating.
But then these same pseudo-economists were predicting a 2002 boom following the 2001 tax cut. If we start our dating at 2002QII when the gap was 2% and ask how much of this gap should still exist four year later, we should have a gap of only 0.6%. You see the first tax cut was followed by a period of very slow growth when the gap continued to rise even as these pseudo-economists were telling us that their tax cut was “perfectly timed”. Could it be that the tax cuts were poorly designed?

I’d also like to turn to a comparison of growth rates during the Reagan-Bush41 years (low tax rates), Clinton years (high tax rates) and the past 5.5 years under Bush43. From the end of 1980 to the end of 1992, potential GDP growth averaged just under 3% per year as compared to actual growth that averaged 3% per year. In other words, Clinton inherited a similar state of the business cycle that Carter left the Republicans. During the next 8 year, real GDP growth averaged 3.6% per year – while this CBO series claims potential GDP grew by 3.2% per year. In other words, the fiscal responsibility increased long-term growth and did not prevent a return to full employment.

Since Bush43 took office, real GDP growth has averaged 2.6% per year with the CBO suggesting potential GDP growth has been only 3% per year. In other words, the fiscal irresponsibility has reduced long-term growth and has not really led to some Keynesian miracle either. And yet the pseudo-economists are praising this economy. It does seem they have no clue as to what the data says nor what real economists have been talking about for many decades.

Comments Off on Phillips Curve, Output Gaps, and the Effectiveness of Those Tax Cuts | Digg Facebook Twitter |