On That Record Dow 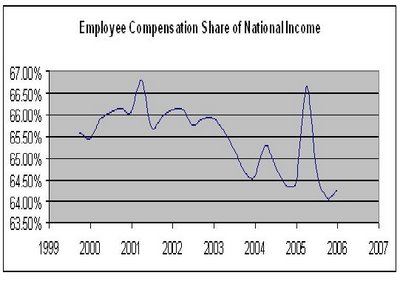 Even the Dow’s record is not quite as impressive as it seems. If inflation is taken into account, the Dow has to rise another 2,150 points before it will set an all-time high.

It does seem that certain rightwingers are high-fiving over the fact that the Dow has reached 85% of its January 2000 level in real terms.

One infuriating feature of business reporting is the constant cheering for a higher stock market. I have nothing against a higher market, but I know of no general public interest in a high stock market. In principle, the stock market represents the discounted value of the future profits of corporate America. If the value rises because the economy can now be seen as growing more rapidly, then this is certainly good news. But, if future profits are projected to be higher because of lower wages or lower corporate taxes (e.g. a higher tax burden on workers or fewer public services), why should the mass of the population, who own little or no stock celebrate? Of course, the higher stock market may just be due to the irrational exuberance of people who control lots of money, as happened in the nineties. This is also not obviously good news. In this case, a higher stock market will shift wealth to those smart enough to get out, from those stupid enough to get in.

Was the high flying stock market in early 2000 due to irrational exuberance or was it due to expectations that long-term economic growth would continue to be strong? In either case, one cannot argue that economic growth has been strong over the past six years – so we have to look elsewhere for why the stock market has partially recovered. Dean mentions two other possibilities: (1) a shift of the tax burden away from capital income and towards labor income; and (2) little of the increase in labor productivity has accrued to real compensation for workers (that is, a shift in the share of national income towards capital income). Our graph shows that employee compensation as a share of national income has declined. Now we have argued that the fiscal policy of the Bush Administration has not reduced taxes – only shifted them into the future. So whether the tax burden on capital income has been reduced is speculative as the White House refuses to tell us who will be responsible for the future tax increases that will be needed to reduce the mushrooming Federal debt. But it is pretty clear that the GOP would rather impose this burden on either consumption or employment income. It would seem that both of these latter possibilities are valid explanations even if the supply-side spin is not. After all – given the increase in the share of income going to capital income and the apparent shift in the tax burden away from capital income – one has to wonder why stock prices in real terms are not higher than they were in early 2000.