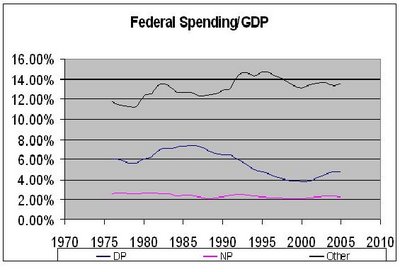 Lawrence Kudlow is concerned that President Bush will not be able to veto a tax increase:

There are essentially two kinds of pay-go. One is a spending limitation that was used by the Gingrich Congress to balance the budget in the 1990s. This would be good. The other is a revenue pay-go, which is not so good. In this scenario, if the Democrats cobbled together a big-bang deficit-reduction package, large tax hikes would be put in place to meet the new deficit targets. Since Congress scores the investor tax cuts on dividends and capital gains as static revenue losses – even though the evidence shows they pay for themselves – these tax cuts would be subject to repeal or rollback. Should revenue pay-go materialize, President Bush might be confronted with a Hobbesian choice of vetoing a so-called $500 billion deficit-reduction package that would increase the cap-gain, dividend, and top-income-bracket tax rates. Truth be told, the Democratic party desperately wants to return the income-tax rate to President Clinton’s 39.6 percent. It’s an obsession that’s lodged in the Democratic DNA, a class-warfare mentality that seeks to penalize the rich and soak American success. In practice, it would be a Soviet-style income-leveling exercise in the name of making the non-rich feel better. And it’s nonsense. President George W. Bush’s tax cuts have done an amazing job of reigniting the U.S. economy. The 2003 tax cuts rallied the stock market, generated 6.5 million new jobs, and produced soaring revenues that have, in turn, slashed the deficit.

I agree with only one sentence here: “And it’s nonsense”. The evidence does not show that tax cuts pay for themselves. The deficit is a lot higher than it was when we had Clinton’s tax rates as real tax revenues per capita have fallen. And economic growth for the past six years has averaged less than 2.5% per year – so this claim that fiscal irresponsibility leads to more long-term growth is bull.

But this is all old news. The real howler in Kudlow’s latest dishonesty is that it was the spending cuts from the Gingrich Congress that led to the fiscal responsibility during the late 1990’s. The problem with this spin is that Federal nondefense spending did not fall as a share of GDP in any material way. Yes, defense spending fell as a share of GDP but the neocon nitwits that Kudlow hangs out with want more defense spending – not less. Beyond the Peace Dividend, the other material thing that led to the Clinton fiscal responsibility was the tax increase that every Republican opposed and that Kudlow cannot bring himself to acknowledge. But you might ask – when was the last time Lawrence Kudlow not lied about fiscal policy? To be honest, I can’t remember.

This isn’t some wacky Kudlow opinion here, this is simply wrong. There’s only one kind of pay-as-you-go budget rule that has ever been in effect. It came about as a result of the 1990 budget deal–the one with the Bush tax hike that Kudlow and his pals denounced as the greatest betrayal in American history. The rule said, simply, that any new entitlement spending or tax cuts must be offset by cuts in entitlement spending or tax hikes. Hence the term ‘pay-as-you-go.’ The rule worked fantastically well, and was credited by various budget geeks with helping to eliminate the budget deficit throughout the 1990s. Then Republicans killed it when George W. Bush became president, and they embarked upon their tax cut and prescription drug bill orgy, neither or which could have passed into law if the pay as you go rules were still in place. Democrats have tried to reinstate those rules, and have been voted down. They’re promising to enact them if they win Congress. Apparently the prospect was so horrific to him it prompted his latest hallucination.