Is the U.S. Deficit with China a Threat to Prosperity? 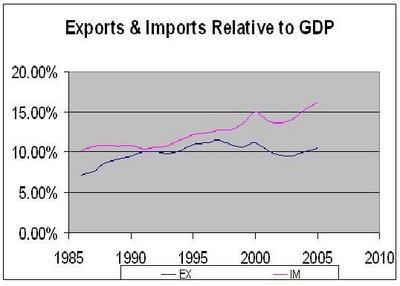 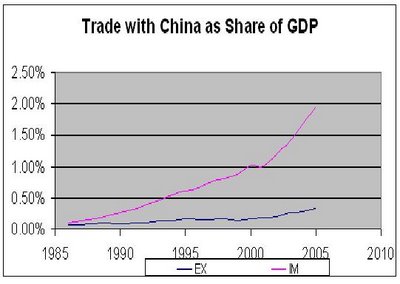 A Wall Street Journal op-ed, which relies on a report from the Cato crowd says no. Max Sawicky turns his microphone over to Rob Scott who takes exception. In a floating exchange rate world, I might tend to argue – along with Robert Mundell – that allowing for free trade with other nations is not aggregate demand reducing. After all, why not just criticize the incompetence of domestic demand policies if we head towards a recession? But the folks at the Wall Street Journal lose even the free trader in me when they write:

So has China “cheated” in the trade arena by holding the yuan artificially low relative to the dollar? The yuan has been pegged at 7.92 against the dollar since the mid-1990s, and Beijing has begun to allow a modest fluctuation in the last year or so. But this is not a “manipulation” of its exchange rate so much as it is a contracting out of its monetary system to the U.S. Federal Reserve Board. That strategy has allowed China to remove the uncertainty of exchange-rate fluctuations from investment decisions and allowed China to grow rapidly while controlling inflation (so long as the Fed controls it too, which is a separate issue). The Chinese have thus avoided the bane of most developing nations of inept monetary controls leading to price fluctuations and periods of hyper-inflation. China was one of the few Asian nations that didn’t face a crippling currency devaluation during the monetary crisis of the late 1990s. Nor is it clear that a yuan revaluation of even 10% to 30% would have any meaningful impact on the U.S. trade deficit. China imports some $100 billion a year of raw materials. A stronger yuan would lower the price of those inputs, and thus of production costs, which could largely offset the impact of the stronger currency on export prices.

Rob Scott has all sorts of rebuttals to some of the sillier claims in this op-ed but let’s focus on a couple:

They claim that rapidly rising exports to China prove that it isn’t restraining imports. Yet U.S. imports from China were six times as large as exports in 2005, as shown in the Journal’s own table … The Journal claims that revaluing the Yuan might not reduce the U.S. trade deficit with China. The last period of booming trade deficits was corrected after the Plaza Accord, which reduced the trade-weighted value of the dollar by about 30%. Dollar depreciation is the best tool available for reducing trade deficits. Revaluation of the Yuan is the critical linchpin needed to reflate currencies throughout Asia against the dollar; without these adjustments, the unsustainable trade gap cannot be reduced. Stabilizing the U.S. current account deficit (the broadest measure of our trade deficit) will require an additional 40% dollar devaluation (most of the needed adjustment is against Asian currencies

Let’s review U.S. exports and imports over the past 20 years – as shares of GDP. From 1986 to the early 1990’s that dollar devaluation did lead to the export share rising relative to the import share. During the Clinton years, however, the export share grew only slowly imports rose to about 15% of GDP. While the import share was modestly higher in 2005 at 16.2%, the export share had dipped and was just under 10.5% of GDP in 2005. We’ve noted before that the weak aggregate demand growth during the Bush years is partly due to weak export demand.

Here is where the WSJ op-ed gets really nutty:

The standard response from the China-bashers (just as the Japan-bashers argued two decades ago) is that America is “exporting” jobs overseas. But over the time period that trade with China has surged, so has the number of new jobs created here.

Our imports from China have exploded rising from only 0.11% of GDP in 1986 to 1.95% of GDP in 2005. Much of that increase has come recently as we have relaxed trade restrictions on Chinese imports – a move I generally applaud. The share of our GDP coming from our exports to China has grown from 0.07% of GDP to 0.34% of GDP. In other words, export growth has been anemic as compared to import growth. Perhaps part of the story is Asian Central Bank mercantilism in the form of a pegged Yuan. And yet the WSJ editorial board seems to ignore just possibilities as they either ignore or distort the factual record.

Without question, a Yuan revaluation would increase our net exports to China. However, we should also note that even a 30% revaluation is neither likely to completely close our bilateral trade gap with China nor our overall trade gap.
Kash over at his new blog provides some insights as to the role of exchange rates as well as fiscal policy on our current account deficit:

In this context, what this means is that the results of the paper by Thomas and Marquez serve as an excellent reminder of the fact that we should not expect the value of the dollar to fall by a lot until the underlying causes of the US current account deficit (namely insufficient national savings, both by individuals and by government) change. Once US consumption growth slows, and/or consumption growth in the rest of the world picks up, the US current account deficit will be able to fall.

My own thoughts on the roles of trade protection, fiscal policy, and exchange rates have tended to follow Mundell thinking with a few qualifications:

If you are thinking that Dean left off trade protection (the first quibble), maybe Robert Mundell might help rescue Dean’s claim – assuming we eventually move to a freely floating yuan. Mundell might tell the trade protectionists that tariffs on Chinese imports would be offset by a yuan devaluation so that our exports to China would decline as much as the tariffs reduced our imports from China. But this Mundell line of thinking leads me to my second quibble as I have been whining about the U.S. budget deficit. To say the U.S. fiscal stimulus does not impact the trade deficit apart from possible impacts on the value of the dollar is akin to saying an outside shift in the demand for a good does not induce more production apart from possible impacts on the price of that good. But again – I’m assuming a freely floating exchange rate.

As this WSJ op-ed endorses a continuation of Bretton Woods II, let me suggest that if exchange rates are fixed, then trade protection would raise net exports and aggregate demand. Now you might argue that we are near full employment, but some of us (e.g., Kash) are hoping for some variation of fiscal restraint, which would hopefully allow for a realignment of currencies that would increase our exports. But then I forgot that the WSJ editorial board often opposes the kind of tax increases that would be required to achieve significant fiscal restraint.