Soon after I expressed my frustration with unified deficit types (which includes apparently Daivd Altig), we see that the press is falling for the deficit is improving canard:

WASHINGTON (AP) – The federal budget deficit estimate for the fiscal year just completed has dropped to $250 billion, congressional estimators said Friday, as the economy continued to fuel impressive tax revenues. The Congressional Budget Office’s latest estimate is $10 billion below CBO predictions issued in August and well below a July White House prediction of $296 billion. The improving deficit picture – Bush predicted a $423 billion deficit in his February budget – has been driven by better-than-expected tax receipts, especially from corporate profits, CBO said. The 2005 deficit registered $318 billion; the record $413 billion deficit was posted in 2004. At $250 billion, it would be the lowest since the $158 billion figure in 2002, the first deficit following four years of surpluses. The CBO estimate continues a positive trend on the deficit after a grim deficit performance during President Bush’s first term, and comes despite soaring war costs and $50 billion in emergency spending for hurricane relief. House Budget Committee Chairman Jim Nussle, R-Iowa, credited the improving deficit numbers to “a responsible budget blueprint and pro-growth policies,” even as Democrats pointed out that at $250 billion, the deficit is still one of the largest in history.

Since the Treasury Department shows total Federal debt (total), debt held by the public (DHP), and intragovernmental holding (IH), I thought I’d plot the change in each series. Over the past four fiscal years, the increase in total Federal debt has been between $550 and $600 billion per year. So to suggest that the General Fund deficit is falling would be incorrect. The reason that the unified deficit has declined a bit is due to the fact that the Trust Funds are running larger surpluses. 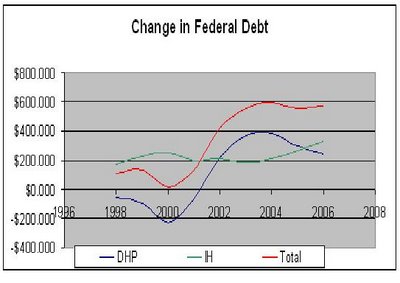 In other words, we should be seeing more pre-funding of our Social Security retirement benefits. Alas, the fiscal policy of the current Administration is to rack up more and more Federal debt. And they have the gall to brag about the fact that they are robbing more and more of our retirement benefits in order to give tax cuts to the rich? Yes, this White House is actually bragging about stealing more of worker retirement funds to finance their reverse Robin Hood fiscal irresponsibility. But hey – it is a Republican Administration. I guess my problem is that the Steno Sue press reports all of this as good news.

Update: AB reader Woody points us to some graph from the Heritage Foundation entitled “Average Federal Budget Surplus or Deficit as a Percentage of GDP, by Administration”. Poor Woody does not realize that the Heritage crowd was looking at the unified deficit and not the general fund deficit. Even then, the fiscal record of Reagan-Bush41 and Bush43 looks quite bleak when compared to the fiscal record of Kennedy-Johnson, Nixon-Ford, Carter, and Clinton. Now if one does this in terms of the average annual increase in real total Federal debt per year as a percent of GDP, the records of Reagan-Bush41 and Bush43 would look even worse by comparison.