How Much Do We Spend on National Defense? 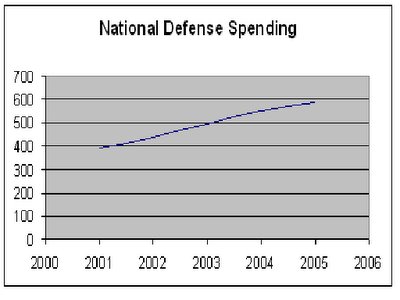 This seems like a simple question and our graph, which is drawn from the NIPA tables provided by the Bureau of Economic Analysis, shows defense spending rising from $393 billion in 2001 to $589 billion in 2005. Winslow Wheeler looks at the Congressional budgeting process and finds it to be very confusing:

Fiscal conservatives might take heart that Congress is proposing to keep defense spending below $500 billion a year – even as the first half of 2006 saw national defense running at a rate around $615 billion per year. But let’s Mr. Wheeler continue:

Neither figure constitutes the Department of Defense’s budget for 2007 – with or without including spending for the wars in 2007, which will not be the $70.0 billion the committees described. The Senate and House Armed Services Committee also just reached agreement on different legislation, the National Defense Authorization Act for Fiscal year 2007. Those committees told us the total for defense was $532.8 billion ($85.2 billion more than the higher House Appropriations Committee figure above). But the numbers from the House and Senate Armed Services Committees – while in agreement with each other – have little, if anything, to do with the amounts will actually be spent on defense in 2007. Feeling confused? You’re not alone. Many journalists reported what one of Congress’s defense committees said and, as a result, misreported to the public just what is the budget for defense spending in fiscal year 2007, which started Oct. 1.

Mr. Wheeler is right – this is confusing. And I’m not sure why any fiscal conservative should trust this budgeting process as it suggests national defense spending will decline in fiscal year 2007. Look, I’m all for a strong national defense but if conservatives are serious about keeping tax rates low into the future, shouldn’t we all expect a little more clarity in such a large portion of the Federal budget?

Update: AB readers requested that I show defense spending as a percent of GDP for an extended time period, which I’ve done below. This only fair as the OMB’s claim that: 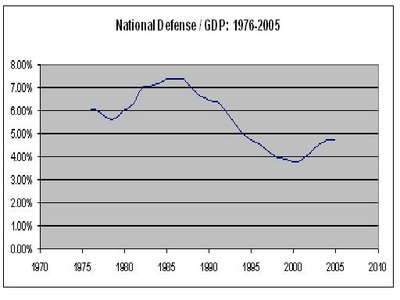