In another edition of Dean Speaks: You Listen, some of the not so good economic news is presented:

At the top of the list we have falling home sales and prices, and record high ratios of mortgage debt to home values. Yesterday, the Commerce Department reported that new orders for durable goods are also headed down. Employment growth has been weak for 5 straight months, while wages have been struggling to keep even with inflation.

Dean offered these realities as an addendum to Good Economic News Cheers Republicans by John McKinnon and Christopher Conkey:

That’s why Republicans are particularly happy to see recent positive news in some closely watched symbols of economic performance. The Dow Jones Industrial Average yesterday came within a whisker of setting a record high, closing at 11689.24, up 9.1% this year. Perhaps more important politically, gas prices, which voters identified as the most important economic issue in a Wall Street Journal/NBC News poll this month, have fallen more than 60 cents a gallon since last month … On other fronts, consumer spending and business investment are holding up well, unemployment is holding steady at 4.7% and yesterday, the Commerce Department reported that the pace of new-home sales in August rose 4.1% from July, a possible sign that the slowdown in the residential real-estate market may be stabilizing. Republicans also see hints that they will finally be able to tout statistical increases in ordinary workers’ wages too, thanks to falling gasoline prices.

This is the best the Wall Street Journal can do? Let’s start with “statistical increases in ordinary workers’ wages”. Average hourly earnings of production or nonsupervisory workers in real terms (1982$) have fallen from $8.30 in late 2003 to $8.15 as of August 2006. And Dean is right about weak employment growth as even the household survey employment-population ratio seems to be stuck around 63.1% as compared to 64.4% when George W. Bush took office.

Since we’ve recently noted that stock prices in real terms aren’t doing better than they were in early 2000, let’s turn our attention to the ratio of investment to GDP – which is our first graph. The claim that investment demand is higher than it was in the late 1990’s doesn’t quite seem right. 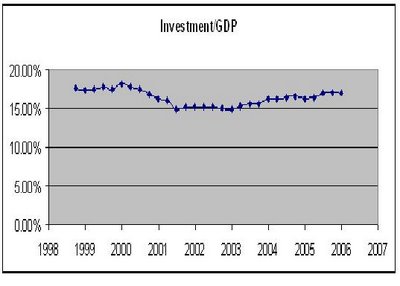 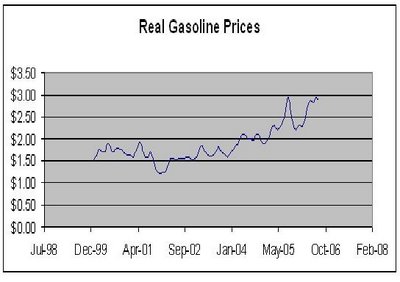