The Economy and Politics: Taking Credit for Nature 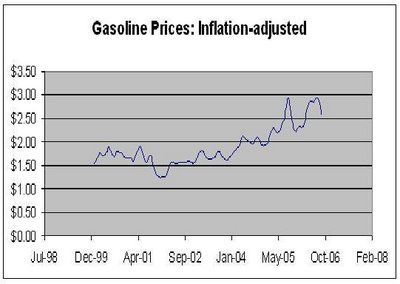 The GOP talking points seem to have a couple of themes. One was on display during yesterday’s All Things Considered, which often invites E.J. Dionne to discuss certain political topics with a conservative. E. J. is usually excellent when he’s not having to waste time rebutting the spin of David Brooks. During the 2004 election buildup, NPR made a very good move by having Chris Caldwell replace Brooks and Chris was fantastic. Alas, yesterday’s show had the one person who could make Brooks look honest by comparison – Rich Lowry. Lowry’s spin on the Iraq War was that opposition to it was based on nothing but feelings as we Democrats have no plan. Of course, that’s the GOP trilogy: we have no plan, our plan would be a disaster, and President Bush has already adopted our plan.

But hang on – this was to be about economics and Lowry said something about gasoline prices that I agreed with and gives me my excuse for a graph. After climbing so dramatically, it was only “natural” that they fall. So Lowry then asked why the GOP was not getting more credit for this decline. Odd – he couldn’t mention any policy moves that led to this recent decline and as our graph shows, inflation-adjusted gasoline prices in September weren’t exactly low in comparison to where they were say in 2000 when Governor George W. Bush was hammering the Clinton-Gore White House on gasoline prices. OK, they may have fallen another $0.25 per gallon in the last few weeks, but they are still higher than they were at any point during 2000.

Kash turns The Street Light on the other theme, which he labels Economic Cheerleading, Economic Misleading with George Will leading the way:

Economic hypochondria, a derangement associated with affluence, is a byproduct of the welfare state: An entitlement mentality gives Americans a low pain threshold – witness their recurring hysteria about nominal rather than real gasoline prices – and a sense of being entitled to economic dynamism without the frictions and “creative destruction” that must accompany dynamism. Economic hypochondria is also bred by news media that consider the phrase “good news” an oxymoron, even as the U.S. economy, which has performed better than any other major industrial economy since 2001, drives the Dow to record highs.

Ever noticed how Will decides to use fancy words to disguise the fact that his columns are almost devoid of substance? Kash summarizes Will thusly:

GDP growth has been strong, Will writes. The federal budget deficit is low. Oil prices are down in recent months. And weak measures of labor compensation (such as those that I showed you the other day) are simply due to measurement problems, according to Will. It’s one of those pieces that makes me lose heart a bit. Every single one of the points that Will makes is misleading, disingenuous, beside the point, or all three.

And then he does a very nice job of contrasting Will’s spin to reality. But I wanted to highlight one aspect of how wingnuts like Will pull off their misleading spin:

Will notes that over the past year (mid-2005 to mid-2006), real GDP grew by 3.5%. In the previous year, it grew by 3.1%, and from mid-2003 to mid-2004, real GDP grew by 4.5%. For the previous three years, however, real GDP growth averaged about 1.2% per year. Over this entire six year period, real GDP growth averaged less than 2.5% per year. Most economists concede that economies that slip into a recession will eventually recover. To paraphrase Rich Lowry, this occurs “naturally” and should not be attributed to Bush’s 2003 tax cut. If Will thinks the last three years were so fantastic, maybe he should consider the period after the Hoover years since he is criticizing Senator Kerry. Real GDP grew by 10.8% in 1934, by 8.9% in 1935, and by 13% in 1936. I doubt the average American thought the 1930’s were the best economy ever – so why would anyone think that a 3.5% growth rate over the past year was so incredible?