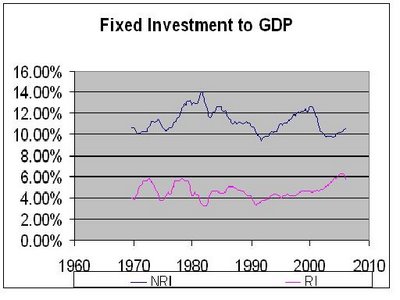 The Bureau of Economic Analysis released its advanced estimate of real GDP growth for 2006QIII – and the bad news is that the economy’s growth rate appears to have slowed to only 1.6% per year.

Now consumption demand grew by 3.1% and government purchases grew by 2%. Exports growth was 6.5% offset by import growth at 7.8%. So why did overall growth fall short of expectations given the above moderately decent news. You guessed it – investment demand fell. Well, business investment was up but residential investment fell significantly.

Let’s be thankful that the Federal Reserve did not raise interest rates – and hope for better news for the fourth quarter (or perhaps the revised estimates won’t be as dismal).

The Democrats and the mainstream media will no doubt say this is firm evidence that President Bush’s tax-cutting policies are starting to fail and that it’s time for a new policy direction. Critics also might blame the Federal Reserve for waiting too long to end its cycle of interest-rate hikes. But these criticisms will be wrong: The ongoing economic expansion is a direct result of the sound fiscal and monetary policies of the past six years, while the current slower pace of economic growth appears to be cyclical and temporary in nature. To begin, the housing market has cooled, which subtracts from GDP growth. However, no one expected the housing boom to continue. Additionally, the housing slowdown does not appear to be spreading to other parts of the economy (e.g., consumer spending continues to grow at a healthy pace), increased business construction is helping offset the decline in housing construction, and the housing decline itself may be ending: In September, housing starts increased and new single-family home sales rose 5.3 percent to 1.07 million (the second consecutive monthly increase) … A GDP report for one quarter is simply one quarter’s worth of data. A broad range of indicators over a longer time period provides a much more accurate picture of our economy: To wit, the U.S. economy grew 3.5 percent across the four quarters preceding the latest GDP data

Where to begin? Notice how Conda said the rise in business investment “is helping to offset” the fall in residential investment? Yes, overall investment demand FELL. OK, he’s right about this being only one quarter but how many times did we here these pseudo-economists crowding how large GDP growth based on one quarter’s information? Conda wants to talk about the last four quarters so he does not have to talk about the last six years – when GDP growth has averaged less than 2.5% per year. But the real howler is:

Update II: CalculatedRisk makes a good point about the recent drop in residential investment by looking over the long-run:

As his graph shows the run-up in the residential investment to GDP ratio over the past several years, I thought it would be interesting to include in a similar graph the ratio of non-residential investment (NRI) to GDP. While we hear all the yada, yada, yada about how this has been rising – its share of GDP is still far below where it was in 2000.