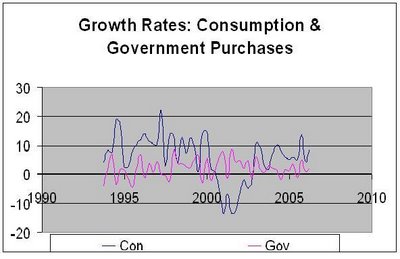 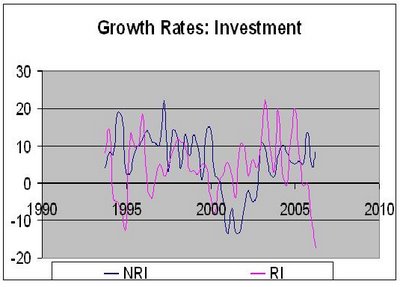 Before I discuss the latest from our conservative friend, let me congratulate Tony Snow for the funniest comment I’ve seen so far on yesterday’s disappointing news per real GDP:

“Everybody expected this. You have a combination of rising energy prices and also rising interest rates, and now you’ve seen a reverse on both,” said White House press secretary Tony Snow.

We have had some fun with the National Review as to their various definitions of core GDP. As I try to follow what the National Review is trying to say, it goes something like this: net exports and government purchases don’t matter. But then they have at times defined core GDP as consumption plus all investment and at others as consumption plus business investment as if residential investment does not count. Which brings us to David’s latest:

Actually that 2.2% guess was higher than a lot of people were guessing – Larry Meyer’s Macroeconomic Advisers for example, had been projecting 1.8% and, frankly, 1.6% was better than I was expecting … The major reason for the sharp deceleration in growth was that the housing sector took over one percentage point out of growth … Basically, you really don’t have a weak economy if consumers are consuming, businesses are investing, exports are growing and imports are strong.

To be fair, David was quoting Joel Naroff, but he endorsed this quote. And David did find one forecaster who thought real GDP growth would be only 1.8%. Was Mr. Snow referring to David’s forecast? But let’s take a look at the numbers. Real GDP grew from $11,388.1 billion to $11432.9 billion for an increase equal to only $44.8 billion. But residential investment fell by $28 billion – so we forget about that, we can report an increase equal to $72.8 billion. Now I feel better.

But this strikes me as quite arbitrary. Why not include residential investment and exclude non-residential investment. By this definition of GDP, we see real GDP rising by only $17.6 billion. Whoops! Then again – why not exclude net exports since they fell by $15.7 billion. Of course, consistency would require that the core GDP crowd would have to exclude government purchases, which rose by $9.6 billion.

Update: AB readers have made a couple of requests. One is to note the story from Carlos Torres:

An unexpected increase in auto production last quarter was a statistical fluke that will be reversed, making current U.S. economic growth even weaker, according to a former Commerce Department economist. Last quarter’s annualized 26 percent increase in auto production shocked Joe Carson, now director of economic research at AllianceBernstein LP in New York. Without the gain, the economy would have grown at an annual rate of 0.9 percent, not the 1.6 percent the Commerce Department reported today.

The other gives me a chance of provide a couple of graphs showing the quarter-by-quarter noise evidenced when one presents various segments of aggregate demand growth. The following graphs are drawn from NIPA Table 1.1.1 of the National Economic Accounts. The first graph shows the even consumption demand and government purchase demand display a certain degree of volatility in terms of their growth rates. The second graph shows the components of fixed investment – nonresidential investment (NRI) and residential investment (RI). We often teach our students that investment demand growth tends to be volatile. The components individually tend to be even more volatile than the individual series, which is what one would expect if the two series were negatively correlated.

The weakness in the residential investment and auto production sectors will not automatically be offset by increases in business investment unless the Federal Reserve reverses the recent increase in interest rates as Brad DeLong recommends.