For the Federal Government, Fiscal 2006 ended on September 30th. And during the coming month, the Bush Administration will surely trumpet their progress on the budget deficit.

Never mind the near record increase in the National Debt ($574.3 Billion in fiscal 2006). And never mind the accounting tricks the Bush Administration used to achieve that poor result. 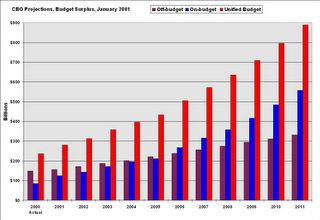 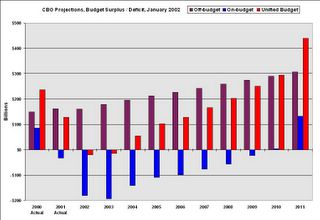 The difference between the two forecasts is dramatic. The off-budget (Social Security) surpluses were still growing steadily, but the on-budget surplus disappeared because of the 2001 recession and the Bush tax shifts (shifting the tax burden from current taxpayers to future taxpayers).

In addition, the January 2001 projections were probably overoptimistic. The projections used the tax revenue from the late ’90s as a base, most likely without fully considering the tax implications of the bursting stock market bubble.

For the final graph, I’ll jump ahead to the August 2006 CBO forecast. Once again the forecast is for the off-budget surpluses to increase steadily; and once again the on-budget deficits are far worse than the previous estimates. 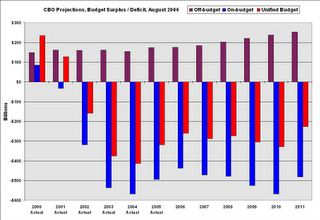 But compare 2006 to the earlier CBO estimates – 2006 is a complete disaster. And the bad news is another bubble is bursting right now (the housing bubble), and IMO the CBO estimates are once again ignoring the budget implications of that bursting bubble.

So when the Bush Administration touts their budget progress in the coming weeks, remember where we were just a few years ago. And remember where the budget deficit is likely to go. They call that progress?